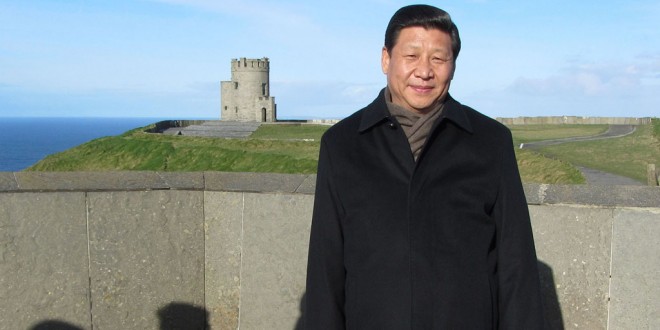 Mr Xi Jinping, at the Cliffs of Moher two years ago.

Clare County Council has accepted an invitation from the People’s Republic of China to send a delegation to the country later this year.

Since the visit of China’s Vice President Xi Jinping’s to Clare in 2012, the local authority has been exploring the potential of establishing a twinning arrangement that fosters the development of closer industrial, tourism, farming, educational and cultural ties between the county and China.

Members of Clare County Council today (Monday) voted in favour of accepting an
invitation from the Vice President of Yunnan Province to visit the region in April or May 2015 with a view to building links between the Burren and Cliffs of Moher Geopark and the Stone Forest Geopark (Shilin Geopark), located in the southwest of China.