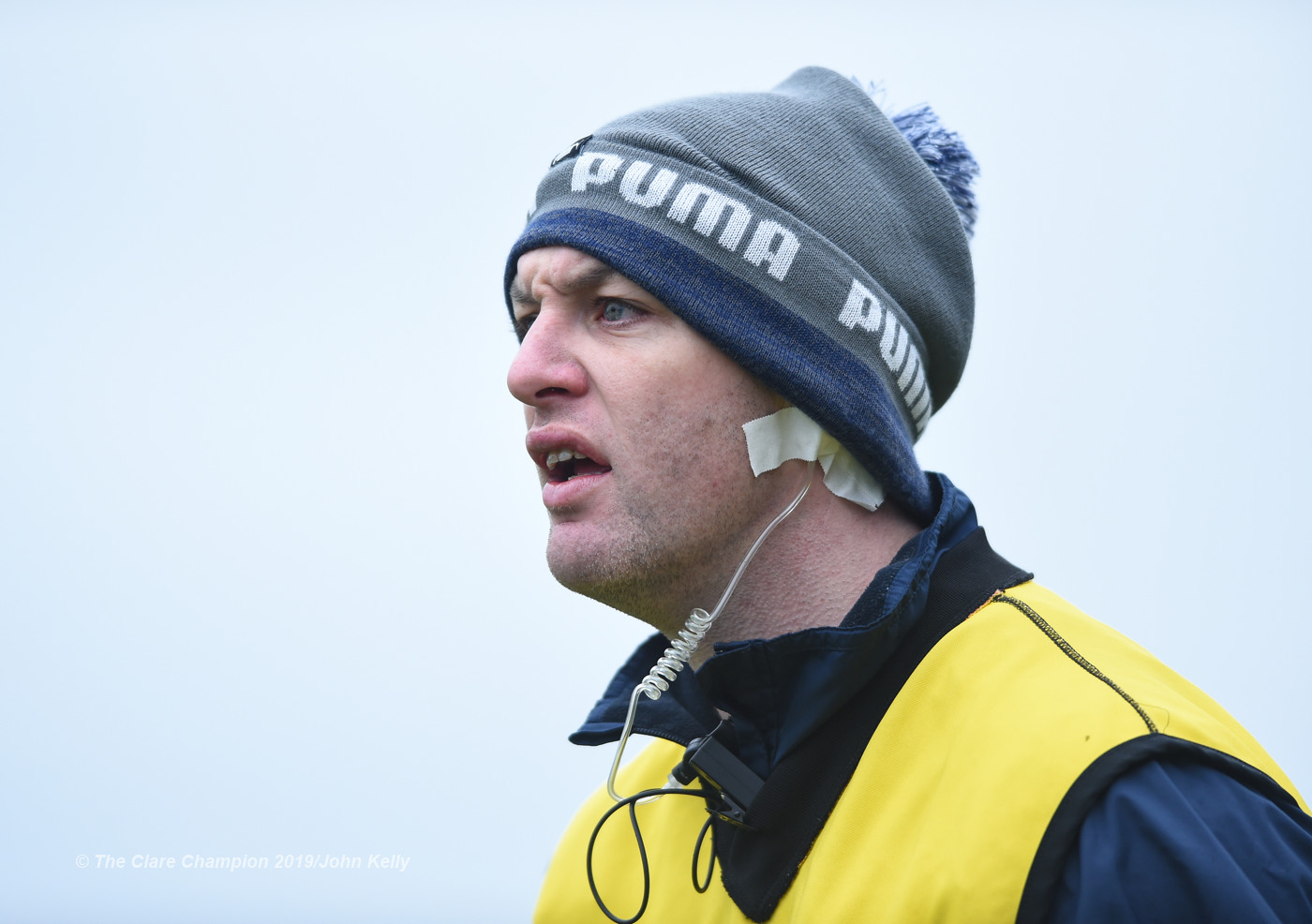 Enda Coughlan, selector of Clare, during their National League game against Donegal at Cusack Park. Photograph by John Kelly.

Coughlan Enjoying Life On The Line

Enda Coughan has been through no less than 13 Munster football championship campaigns since making his debut on the Clare senior panel in 2004. He stepped back from playing in 2016, before a call came from Colm Collins that saw him get back involved with the panel as a selector in 2018.

He admits it was a move that took even him by surprise at the time.

“To be honest I didn’t think it would happen so soon because I am still playing with the club so I am trying to combine both. I would have thought it was something that would have happened further down the line. Colm came knocking to see would I get back involved to give a hand and once he asked, it was something I was looking forward to doing. It is a learning curve to me and I am delighted to be working under Colm and learning from the coaches so I am enjoying at the moment. When he made contact it was a little bit of surprise because I wasn’t really expecting it. I am delighted to be able to give a hand, and to be honest that is all I am doing. It is Colm and Brian Carson and all the other coaches that are doing a huge amount of work and I am just learning from them” he noted.

The Kilmurry Ibrickane clubman has been an almost ever present in either a playing or coaching capacity since Collins took over in 2014. Prior to that, he was part of numerous attempts to escape the clutches of Division Four, while the highlight would undoubtedly have been reaching the 2012 Munster Final, despite losing out to Cork on the day. Coughlan says the work undertaken by Collins has reaped major benefits.

“The years under Colm were certainly the most successful. He brought a serious sense of professionalism when he came in and got good coaches around him. We always knew there were good players there but he just got us more organised and we were lucky enough to get two promotions under him. I can’t speak highly enough of him as a manager, he really is excellent. His man-management skills are brilliant and his knowledge on the line and of Clare players is top class. When you put all that together, he just got us playing well and lads wanted to commit to the cause. Lads were always interested but when I came in we were only training two nights a week and playing a match at the weekend. Now it is gone to a different level with up to six nights a week nearly and lads doing their own bits at home. They behave and live like professionals now and I can’t speak highly enough of them. They do everything that’s asked of them in terms of training and diets so they are working as hard as they can to be the best they can be. You see the benefits it has reaped for Clare football. We are looking at a third year in Division Two so hopefully now we can make more strides in championship” he said.

The first step on the Championship 2019 ladder comes on Saturday with the visit of Waterford to Cusack Park for what will be their first outing under new manager Benji Whelan. It will be Clare’s first competitive game since a dramatic late victory over Tipperary in Thurles saw them retain their status in Division Two of the league. Coughlan admits while that was a positive, it should not have come down to such a close shave.

“The league was very up and down for us. We played some excellent stuff and we played some awful stuff. Coming into championship now we have to be more consistent across the 70 minutes. Having those long spells without scoring is something we have looked at and hopefully have rectified. It is not something we are majorly concerned about because we still are getting our scores but it is just that we seem to get them in bursts and then switch off a bit. Even in the Tipperary game we got nearly all our second half scores in a short space of time and then went until the last few minutes before getting the rest. If we can just work on getting scores on a more regular basis we will be fine” said the Shannon based Garda.

The eight-time Clare senior football championship winner has something of a unique perspective on the club v county debate in that he is still lining out for Kilmurry Ibrickane while also patrolling the line for Clare. With the working of the club of month of April coming under such scrutiny ahead of the championship starting so early in May, he feels it is hard to strike the right balance under the current structures.

He said: “I can see it from both sides really. As part of the management team it is tough because you are worried about your players getting injured. You can’t do too much during the week because some of them might have two games to play at the weekend. As a club player, you want to play against teams that are full strength because that is when you learn more about your own team. In April there are now five of the seven league games played so now you are looking at a long gap without any major action. I would like to see more games played for sure but they have to be played with full strength teams. I really don’t think you should devalue your leagues and not play with the best players. In my own opinion, I think the time is coming where they will have to separate the club and county scenes in the calendar. The county could run from January to the end of July and then the club after that and get them all finished. Something like that will have to be looked at and to be honest I feel sorry for the fixtures committee. They’re trying their best to get games played and let everyone know when they are on which is excellent but if you are not involved with the county, there are a lot of months where you have no games. They can’t do much more really with the structure that is there at the moment”.

The prize for the winners on Saturday evening when Waterford come to Ennis is the right to host Kerry in the last four of this year’s Munster senior football championship. Victory for Clare would set up a fifth meeting with the Kingdom in the last six seasons, with the holders coming out on top in each of those fixtures. Coughlan feels the repetition in the current championship structure is something people are tiring of.

“We have Waterford first and that is our only focus at the moment. In an overall sense, there are only five other teams in the province that you can play so you are going to meet them regularly enough. It’s not like the league where there is promotion and relegation that means you are facing different teams every year. That’s what people want to see is bit of variety, not playing the same five teams every year. It is just the way it is at the moment and I’m not sure what the answer is unless they look at changing the whole championship. Waterford are our target though and they are going to come with a really tough challenge. They are going to see Clare as a potential scalp, and in Colm’s first year they could have beaten us in Ennis before we got past them in a replay down in Dungarvan. We know they’ll be dangerous and we will be ready for them. They are a team that get a lot of goals from looking at their league campaign, and they are going to come with nothing to lose so we have to bring our best performance to see off that test” he concluded.

You can listen to the full interview with Enda speaking to the Clare Champion’s Derrick Lynch below.