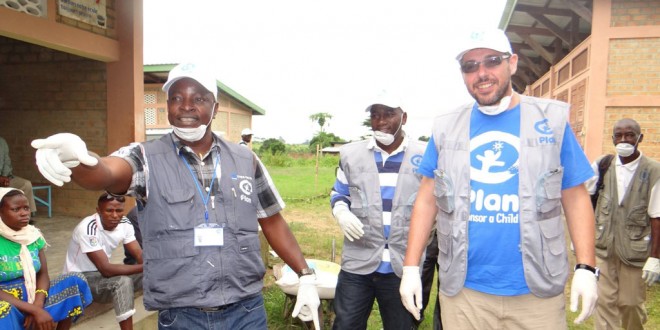 Damien Queally, from Inagh, walks through a food distribution area in West Africa.

COMPANIES in Clare should “step up and provide corporate support” to West Africa, as it fights to contain the outbreak of Ebola, an Inagh man leading one NGO’s response to the disease in the region has said.

Damien Queally of Plan Ireland has just returned to his base in Senegal from a visit to the charity’s projects in the three worst-affected countries.

“We are looking for medical personnel, good solid project managers who are able to keep multiple activities moving at the same time, logisticians. It would be great if some companies would step up and provide corporate support with some of the supplies that are needed. Personal protective equipment for one person is about €50, a water hygiene kit is about €25,” he said.

“After visiting the three countries, while I was a bit apprehensive going in, once I saw the hand-washing checks everywhere, the temperature checks everywhere…there is a lot more in place, my fear went. Having gone there, I now know how low-risk it is so it is even more frustrating when people are not willing to come in and support the response,” he said.

Mr Queally, who plans to be home for Christmas, warned that the long-term effects of the Ebola crisis could claw back gains made in nutrition, education and vaccinations and could, ultimately, devastate the countries, if ongoing help is not provided.

“Guinea and other countries are pushing for schools to reopen, so we are looking at how you can get water, chlorine, hand-washing equipment to these schools, and if you had rigid entry and exit procedures and visitor control, and maybe staggered attendance, well could schools reopen in a safe way?” he asked.

“Vaccinations are not happening. How many children are going to die from diseases, like measles and meningitis and what not, next year? Farms are not being tended to. How many people will suffer from severe malnutrition in six months time, when they should have the crops coming in? Women are giving birth at home because they are afraid to go to health centres, in case they get Ebola. There are things like that happening. There are a huge amount of secondary elements. My boss here calls it the Iceberg Effect: we can only see part of the iceberg but what is hidden under the water is much bigger,” he continued.

The international response, he conceded, has improved but more is required.

“There are more financial resources coming in, a bit more human resources but not enough. The British are playing a key role in Sierra Leone, getting centres set up, getting sites marked out. It is not as clear that there is strong leadership in Guinea and Liberia,” he outlined.
“Anything we do is going to be better than what is there in these areas already. So how can we just be practical and improve things, rather than just waiting for something that is perfect? I think the international response has improved but there is still a huge shortage of health specialists,” he added.

Plan Ireland has drafted in fourth-year medical students to run community care centres it has set up but, like other NGOs, it desperately needs experienced volunteers to train these local health care workers.

“To manage them, you need experienced, strong medical professionals, who are very good at following standards and protocol, of which we have a much higher standard in the Western World than they have in a lot of the African countries. They need to be managed so that they are following procedures to a T and are not putting themselves at risk. But we are not getting project managers to come here,” he concluded.