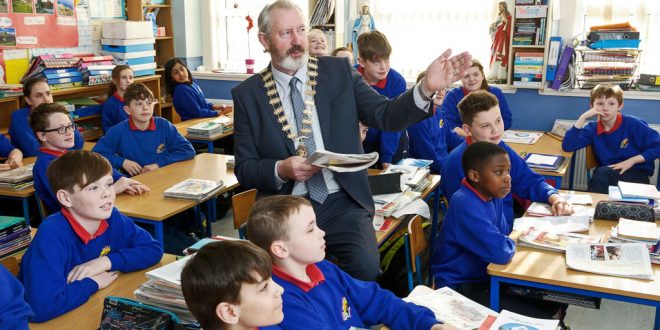 The new vice-president of the Irish National Teachers’ Organisation, Joe Killeen, with his class in Lough Cutra. Photograph by John Kelly.

Corofin man Joe Killeen is the new vice-president of the Irish National Teachers’ Organisation (INTO). The principal of Lough Cutra National School, near Gort, was elected to the post at last weekend’s annual congress in Belfast.

The Irish National Teachers’ Organisation has in excess of 43,000 members, of which 7,300 reside in Northern Ireland. Its members teach in the region of 600,000 pupils.

Mr Killeen began his teaching career at Kiltrusten National School in Strokestown, County Roscommon, and became principal at Lough Cutra in 1987. In the same year, he became Gort INTO branch secretary. He went on to represent the Gort INTO branch and District 6 of the INTO (Galway/Roscommon) for over 20 years.

In 2008, he was elected to the central executive committee of the union to represent INTO District 6, which has a membership of 2,500 teachers.

Mr Killeen was a member of the Small Schools Task Force, set up in 2012 by the union to advise the executive on opposing proposals by the Department of Education and Skills to close small schools.
“We have worked hard in the area of improving the pupil/teacher ratio, which at present is at 27 to one. We have undertaken a lot of work but there is more to do. Our wish is to progressively reduce this to the EU average of 20 pupils to one teacher. Crowded classrooms reduce the children’s attention. Smaller classes lead to less stress, more success,” said Mr Killeen.

“We will continue to increase supports for special needs pupils and supports for school staff through the increased involvement of the Educational Psychological Service and other support services at school level,” he added.

Also high on Mr Killeen’s agenda is to challenge “the disgraceful situation where we have two different pay scales for the same job. The plight of the lesser-paid teachers must be addressed in upcoming pay talks.”

Pay talks will commence in the next few weeks, after the Pay Commission Report.

“We must have pay equality for our young teachers, who are on different pay scales, due to a pay cut for new entrants, payment of the principals/ deputy principals pay award agreed in 2008, combined with a general increase in pay for all teachers to ensure industrial harmony for the future. Our colleagues in Northern Ireland are in pay negotiations with their administration, with a meagre pay increase offered, which has led to continued industrial action over recent months.

“As an unintended consequence of the concentration on fiscal matters, increased numbers of parents have fallen into the area of disadvantage in the recent past,” Mr Killeen stated.

“Greater awareness is needed to understand that this poverty crisis has both an urban and a rural dimension. Many pupils who are from disadvantaged backgrounds are supported through DEIS schemes, which need further resourcing. Hotspots of poverty and inequity need concerted, directed support.

“As a principal of a rural small school, I can acutely appreciate the necessity for a reduction in the pupil-teacher ratio, the need for an increased number of release days for administration and a reduction of the workload of principals generally. Primary education is the focus for so many initiatives that all teachers are calling for breathing space to allow those in place already to bed in.”

Mr Killeen is looking forward to helping to lead the teachers of the 32-county organisation into its 150th year in 2018.

Outside of his work as a busy principal and teachers’ union figure, Mr Killeen is involved in a range of community, rural, cultural and sporting organisations.

He is a member of the Clare Community Forum, an umbrella group for voluntary organisations, and chairman of the North Clare [Corofin] Show for the past 20 years. He is also involved in the local GAA club. While hurling is his primary interest, he also follows various other sports.
Mr Killeen is married to Marian and they have three sons.

Should he succeed in being elected president of the INTO, he would be following in the footsteps of a fellow parishioner, Declan Kelleher from Kilnaboy, who was elected in 2008. The most recent Clare man to hold the post was Sean McMahon, principal of Mullagh National School, elected three years ago.