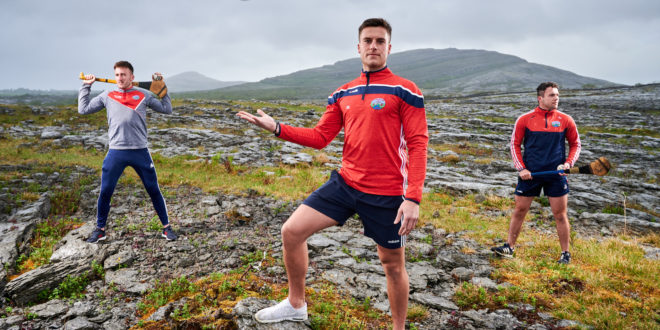 Corofin Gaa players Jamie Malone, at front, with Gearoid Kelly and Gearoid Cahill behind, among those taking part in the forthcoming Corofin Climb Everest "Solo Run Challenge" which is on June 6th at Mullaghmore in The Burren. Photograph by John Kelly

Getting through the Covid-19 crisis can often seem like climbing a mountain for some, but the Corofin GAA club have decided to turn that on its head.

The North Clare club will descend on one of the most iconic landmarks in the county on Saturday June 6 for a unique fundraising event.

The Solo Run Challenge will see 50 members of the club make their bid for the summit of the famed Mullaghmore in the spectacular Burren landscape, all while soloing with either a football or hurley and sliotar. The target is for the participants to reach the top having completed the combined distance it takes to reach the summit of Mount Everest. The challenge will be completed throughout the day in small groups with all participants adhering to current social distancing guidelines. All funds raised from the event will go towards Cystic Fibrosis charity TLC4CF.

Among those taking on the challenge will be county star Jamie Malone, who is back from taking time out to travel late last year. The 2019 football All-Star nominee says seeing how other groups had helped in raising funds for charitable causes in the midst of the Covid-19 crisis helped sparked the idea for theirs.

“Over the last couple of weeks there have been some great fundraisers run by people all over the country and everyone has been really generous towards them. It is great to read about all those and see all the money going to some great charities that do fantastic work. We are in the middle of our own one at the minute to raise money for the local branch of the Cystic Fibrosis charity which is TLC4CF and they cater for the Tipperary, Limerick and Clare areas. It is a fundraiser that is unique to us here in Corofin in that we are incorporating Mullaghmore into it. We will have over 50 members of the club climbing the mountain doing 50 ascents which will equal the total distance of climbing Mount Everest. We will be there from early morning and it will be going on all day in small groups. Hopefully people can call up to encourage us on or get involved in any way they can” he explained.

The Dublin-based primary school teacher admits it was an idea that garnered immediate support.

He said: “It was our management who came up with the idea and Colm Clancy had the idea of incorporating Mullaghmore into it. It was initially mentioned on a Friday evening and we decided to go ahead and try to organise something, and by the Sunday morning I had a list over 50 names of people had volunteered to take part and wanted to take it on. There was a great response from people within the club and it give us a chance to come together and have something to work towards over the next few weeks as a group when we don’t have the usual routine of training and games. It is great to involve the community in it also and strengthen that relationship between the club and the supporters. People are realising at the moment what is on their own doorstep and in Corofin we are lucky to have the Burren region and the beautiful scenery that goes with it. There have been plenty from the locality who have been making use of it in recent times and hopefully that will continue when things get back to normal”.

The decision to have the funds from the event going towards helping those living with Cystic Fibrosis was an easy one for all concerned, with a fellow clubman and team-mate soldiering through with the condition. Malone outlined that TLC4CF is an organisation which means a lot to people in their locality.

“It is tough for people who suffer from CF along with their families and friends. The idea was put out there to do something for a charity and one of our players Gearoid Cahill mentioned the CF charity so everyone was on board with that. One of our teammates suffers from CF but he plays hurling and football with us and is one of the most popular guys within the club and within the group. He is an amazing guy and has a super attitude to the way he approaches his sport and life in general which is really admirable. It is particularly tough for him at the moment having to isolate but he just has to do it. TLC4CF is just a brilliant charity and they do amazing work. It really is a charity that holds special meaning for us in Corofin as a club and community” he noted.

Malone made the decision to step away from the Clare senior football panel for the 2020 season as he took time out to go travelling for the year. The outbreak of Covid-19 saw that come to a premature end as he was forced to return to his native Kilnaboy sooner than expected. He says it was a welcome break after a busy few years to focus on something other than the intercounty lifestyle.

“I was away for five months and in that time I got to meet some really good people and experience really interesting places. I went away with two friends and spent around three months touring south-east Asia, and I was in Australia for seven weeks. I got to catch up with some friends over there and then do a bit of travelling around there for the few weeks. It was really enjoyable while the going was good but things are grounded now for the minute so we will have to see how things play out over the next while. When I was away, there was no real mention of GAA. There was no watching it or reading about it, I just switched off from it all for a while. It was only when the league got going that I was really in touch with a few of the lads to wish them well. Now that I am home, I am not part of the county squad but it doesn’t really feel like missing out because there is nothing on at the moment. I love the GAA and obviously it has been a huge thing in my life for a long time now but there comes a time where you need to switch off and focus on other things in your life too. I have enjoyed the break from it but it might be a different feeling if it was in the height of championship now and the lads were after winning the Munster quarter-final and were looking forward to a semi-final. If I was looking on at that, that might affect me differently and you would miss the camaraderie within the group during those times” he said.

There will be a return to some form of normality in September for Malone as he returns to Dublin to continue his teaching career. His future in any potential 2020 championship for Clare remains less certain, but he says the new reality of Covid-19 is the first thing on everyone’s minds at the moment.

“It is really different and it is just strange at the minute. You just have to try and keep yourself busy and keep positive as much as you can. Some parts of it have been tough to handle but there have some parts that are not too bad. It is good to just slow down sometimes and reflect on things like how best to spend your time. I don’t mind being at home out of the way for a while but everyone is in the same boat. People say we are all in it together but we really are. It doesn’t really feel like you are missing out on stuff when it is the same for everyone so we have to just keep positive and keep busy while we can. It is different when you are doing that bit of ball work or fitness work on your own. When you are only training for yourself, you can plan out your own time that suits you best and juggle things around. When you are in county training, there are the set amounts of hours that you have to do and you can see the amount of time that you are giving up. A lot of the time it was not the actual training that lads found tough but it more the amount of time that went into travelling and not being able to balance things out yourself. There is that bit more freedom now to do that training whenever you want and take a break whenever suits me. It is different and I think everybody has just been getting used to it over the last few weeks” he concluded.