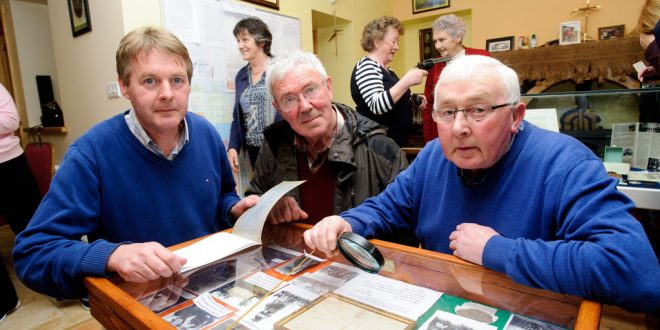 THE Cooraclare connection to the late Con Colbert, who was executed by firing squad at Kilmainham jail on May 8, 1916 was commemorated last weekend.

In Cree, historian Paddy Waldron was joined by MEP Seán Kelly and former Minister for Education Mary O’Rourke for a fascinating discussion about Con Colbert’s life and times.
Con Colbert was from West Limerick but his mother Hanorah Josephine MacDermott was from Clondreddan in Cooraclare.

Tom Mac’s shop in Cooraclare village was the venue on Saturday for an exhibition of 1916 memorabilia, including a letter written by Con Colbert on the night prior to his execution, to his uncle Dan Irving of Cooraclare.

Flan Irving is Dan Irving’s grandson and he told The Clare Champion on Saturday how touched he was by the three day commemoration. Incredibly, the letter has remained in the Irving household for a century.

“This event has been emotional. The actual letter has been in our house for 100 years. Dan Irving was my grandfather and his wife, Catherine, was Con Colbert’s aunt. The letter was sent to Dan Irving because Catherine was dead. We kept it in the house and we were very proud of it. We were very protective of it. That’s why it was never handed over to anybody. We hope to give it to a museum after this,” Flan explained.

Back living in Cooraclare since 2011, having returned from England, Flan was fulsome in his praise for the Con Colbert Commemoration Weekend organisers. The committee was chaired by Joe Garry.

“We thought it was a marvellous idea and the community has been marvellous altogether. We couldn’t believe that so many people would lend a hand. Tom Mac was a lovely man and he’d love this exhibition. When we were in England we used to come on holidays and Tom would always give you something like a bar of chocolate when you were here shopping,” he said.

Kathleen Irving, who lives in Essex, made the trip to Cooraclare for the weekend. As she eyed the items on display in the exhibition in Tom Mac’s shop, she marvelled at their significance.

“Con Colbert was our second cousin and first cousin to our father, who was Con Irving. My brother, Flan, made this cabinet and put all the artefacts in. My other brother, Niall and my sister, Mary, are also here from England. We’re very impressed with what everybody has done. They have worked really hard. Last night was absolutely marvellous,” she enthused.

The exhibition ran for several days and among the visitors were pupils from Cooraclare National School.

Eva O’Keeffe, who is Kathleen’s cousin, was equally impressed. “We’re very honoured the way thing have turned out. It’s fantastic to have such a close connection with the past,” she said.

An Oíche Ghaelach was held in O’Keeffe’s Bar on Saturday night, while a commemorative mass, on the 100th anniversary of Con’s death, was held on Sunday morning in St Senan’s Church, Cooraclare. Following the mass, a plaque unveiling took place in the village.