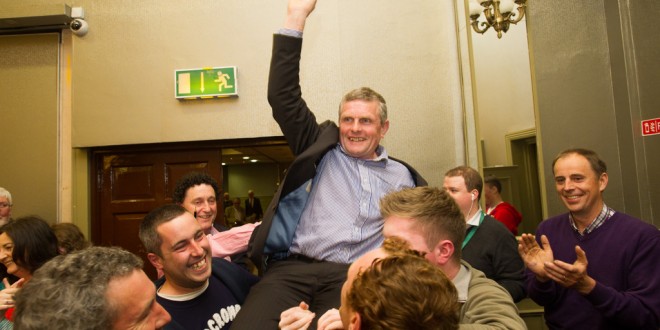 Poll topper in Killaloe area Joe Cooney is lifted on high by supporters as he is deemed elected during the election count at The West county Hotel, Ennis. Photograph by John Kelly.

Cooney elected with over quarter of vote

Joe Cooney (FG) is the first county councillor to be elected in the County Clare Local Election. With 2,843 votes, which is expected to be the largest vote in the county, Councillor Cooney’s vote was 1,258 over the 1,585 quota.

Speaking following the announcement he said, “I’d a brilliant performance. I didn’t expect a performance like that”.

He put the performance down to the hard work he has done for his electorate over the past five years.

“I worked hard for the people in those five years. I think the vote today is a true reflection of that,” he said.

As counters begin assigning his 1,258 surplus votes, Joe believes his two party colleagues Pat Burke and Joe Arkins will net the benefit of these, “both have done well, I think they stand a great chance and I think both of them will get elected”.

Announcing details of the celebrations to follow in O’Callaghan’s Mills, Cooney said, “We’ll have a celebration night in the Mills Tavern tomorrow night at around 6pm and everyone is invited”.

Before that there’s just enough time for him to catch the Ger Loughnane Cancer Challenge between Clare and Dublin in Cusack Park.

“I’ll drop into Cusack Park to the match, then I’ll return to the count centre later on,” he concluded.