Home » Sports » Coolmeen: A small parish with a big heart 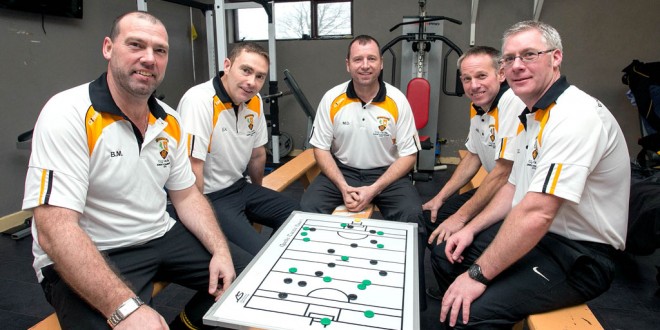 Coolmeen: A small parish with a big heart

LOCAL historian and Coolmeen GAA club activist Paul Markham estimates that the current parish population is 650, in what is a 225-house community. He says that in the region of 30 people from the community, in the 20 to 30-year-old age bracket, have had to emigrate in search of work.

While there are plenty of young players on the panel, the two schools in the parish have a combined pupil population of just 32. There are two teachers in Cranny National School, which has 21 pupils, while one-teacher Coolmeen National School has 11 pupils. This reflects the challenge that many rural schools in West Clare face, as populations continue to decline in the region.

There is no post office and no shop in the 24-townland parish, which has two pubs.

“Since the 1960s all three post offices in Shanahea, Cranny and Coolmeen have closed. The creamery at Cranny has been demolished. Public houses like Moloney’s in Coolmeen and McMahon’s in Cranny have closed. Most townlands in olden days had their own shop, these have also disappeared. The most recent of the rural shops to close was McGrath’s at the Six Crosses in 2007,” Paul noted.

While the present population is quite small, the 1846 population stood at 3,186. A total of 518 families lived in the parish in the second year of the Famine.

Describing historic events in the parish, Paul said, “The then President Eamon DeValera attended a funeral of Fr John O’Dea in January 1934 at Coolmeen church. The PP was killed from a kick of a horse.”

He also outlined why the club was forced to play without jerseys in the early 1920s.
“The Black and Tans burned a set of Coolmeen jerseys in June 1921. They took them from the Haugh home and the Coolmeen team had to play a senior championship game without jerseys,” he explained.

While a huge Coolmeen contingent will travel to Cork on Sunday, it won’t be as big as the crowd that attended the races in the parish 153 years ago.

“The biggest gathering in Coolmeen was in January 1862, when 6,000 people assembled in Moyralla for the Moyralla Races organised by the gentry. It was a huge gathering and made the front page of The Clare Journal. The racing was equal to the GAA now a day,” he pointed out.

Paul also note that the late parish priest, Fr John O’Keeffe, who served in that role from 1989 to 2010, was “a legendary figure” in the parish and would have been one of the first in Mallow this weekend if he was still around.

Kilfiddane is the official name of the modern-day parish of Coolmeen-Cranny and is situated in the barony of Clonderlaw, containing 6,242 hectares. The length of the parish from Cragg to Shanahea is 11.2km and the breadth from Derrynalicka to Crossderry is 4.8km. The names of the townlands are mostly derived from geographical features of the district. Kildysart and Kilfiddane parishes were united until 1868.

Paul also recounted suffering evident in the parish during the Famine.

“In the folklore survey of 1937, we learn that Kilfiddane Graveyard was one mass of coffins, as the people were too weak to open the graves for those who were dead. Many were forced to take shelter in the workhouses in Kildysart and Kilrush. Many people from Coolmeen and Cranny emigrated to America, Canada and Australia.”

Shanahea man Dr Michael Garry was capped seven times for Ireland in rugby. His brother, Dr Joseph, along with Derryshane’s Michael Galvin lost their lives in the sinking of the Lusitania in 1915.