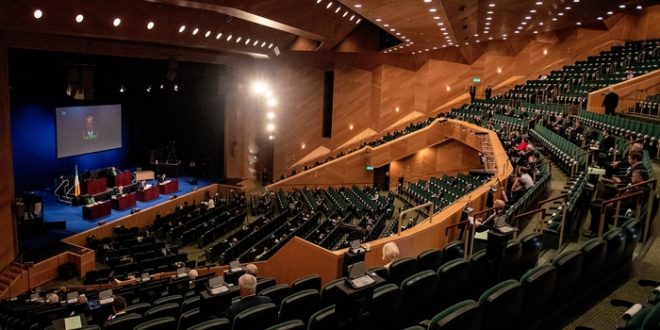 PERHAPS like toddlers up past their bedtime, TDs were just over-tired as they hurled abuse at each other across the floor of the Convention Centre last week.

As the first term of the 33rd Dáil drew to an end with a blazing row over speaking slots, the Leas Ceann Comhairle Catherine Connolly noted that it was very late and everyone was very tired.

And after all, forming a government had taken a full four months. The gruelling process caused at least one minister to sink into those plush-looking Convention Centre seats for 40 winks, once the three-way coalition deal was finally done.

Toddlers, we can easily forgive. With seasoned politicians, it’s more difficult. Several aspects of first term for the history-making coalition have been unedifying. We have had conflicting messages from the parties and internal wrangling within them. After packing their bags for a six-week break, TDs engaged in further back-biting; online and in the national newspapers. You could be forgiven for thinking Coronavirus had gone away and there wasn’t a common enemy that we must face with a united front.

At least, you can contrast the chaotic scenes in the main chamber with the smooth efficiency of Dáil’s Special Committee on Covid-19 Response. Under the rigorously impartial stewardship of Scariff’s Deputy Michael McNamara, that committee has given a voice to those on the frontline – in hospitals, nursing homes, direct provision centres, meat factories, small businesses, and in private homes where families struggled with the shutdown of supports. Far from becoming the ‘star chamber’ that some commentators feared, the committee has, by and large, proven to be a reasonable and respectful forum for examining the impact of the pandemic.

Several witnesses gave moving testimony, among them Lorraine Dempsey of Inclusion Ireland, the national association for people with disabilities. She prompted the Chair to comment on his own experience of parenthood, when she outlined the “catastrophic” impact of the lockdown on the families of children with special needs.

Another key area of focus has been our nursing homes. The situation there is the subject of the committee’s interim report. Noting that deaths in these settings account for 56% of the national total, as of June 29, the report has recommended that clinical governance and oversight is reviewed urgently for private nursing homes. It also calls for the appointment of a medical director to every nursing home, whether private or public.

In his foreword to the interim document, Deputy McNamara noted that the committee is to return to the subject next month, when it will examine reports from The Health Information and Quality Authority (HIQA) and the Expert Advisory Panel. The Independent TD also pointed out that the committee may yet recommend a public inquiry to look at the impact of Covid-19 on nursing homes between last March and May.

“Covid-19 provided a wakeup call to push the shortcomings in care for our older population higher up the agenda of our public health authorities,” Deputy McNamara said.

The Interim Report on Covid-19 in Nursing Homes is one of the most important pieces of work produced so far this year by our politicians. Its recommendations will give some hope to many residents, families and staff of nursing homes for whom the last five months have been characterised by untold worry, sorrow and stress.

Let us hope that as government and Dáil members refresh and regroup over their summer recess, they will reflect on its findings. As we see the start of a possible second wave, it is time to stop throwing the toys out of the pram and unite to face the future.

Fiona McGarry joined The Clare Champion as a reporter after a four-year stint as producer of Morning Focus on Clare FM. Prior to that she worked for various radio, print and online titles, including Newstalk, Maximum Media and The Tuam Herald. Fiona’s media career began in her native Mayo when she joined Midwest Radio. She is the maker of a number of radio documentaries, funded by the Broadcasting Authority of Ireland (BAI). She has also availed of the Simon Cumbers Media Fund to report on development issues supported by Irish Aid in Haiti. She won a Justice Media Award for a short radio series on the work of Bedford Row Project, which supports prisoners and families in the Mid-West. Fiona also teaches on the Journalism programmes at NUI Galway. If you have a story and would like to get in touch with Fiona you can email her at fmcgarry@clarechampion.ie or telephone 065 6864146.
Previous “We need a new direction and new leadership”
Next Increase in number of contacts made to Rape Crisis Centres