This month marks the 100th anniversary of the death of IRA volunteer John Ryan of Crossagh, Newmarket-on-Fergus, who was the first fatality of the War of Independence in Clare.

Ryan, a member of the IRA’s East Clare Brigade, was killed by members of the Royal Irish Constabulary during a cattle drive on the Blood-Smyth estate in Castlefergus, near Quin, on Sunday, March 24, 1918.

To mark this centenary, a group of local historians and republicans has formed the Volunteer John Ryan Centenary Committee and, next Sunday, a series of commemorative events is planned. The committee has already had Ryan’s headstone professionally cleaned and his grave refurbished at Clonlohan Cemetery. On Sunday, a piper will lead a procession from Castlefergus to Liddy’s house in Doora, where Ryan died from his injuries, for the unveiling of a commemorative plaque at 2pm.

There will be a laying of wreaths at the spot where Ryan was killed, a reading of the 1916 Proclamation and an oration by a historian. The organisers are keen to stress that this is a “community based, non-party political event” and that all are welcome to attend. 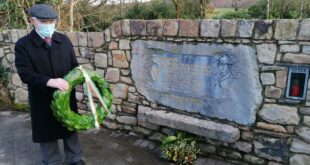