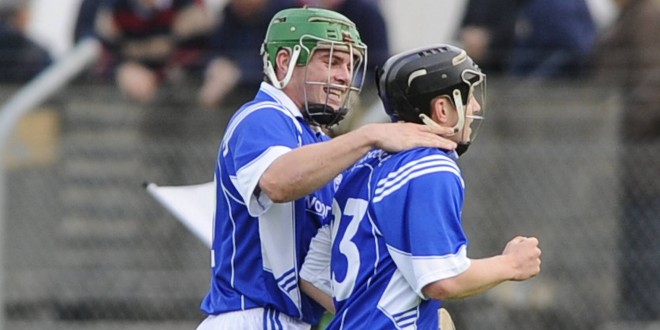 Seán and Podge Collins may have left down the hurleys for 2013 but their GAA season is not yet over as they face Éire Óg in the senior football semi-final on Sunday.

WHILE currently concentrating on Cratloe’s county senior football semi-final meeting with Éire Óg in Clarecastle on Sunday, Seán and Podge Collins would ideally like to play both codes for Clare in 2014, if feasible.

Along with clubmates Cathal McInerney, Liam Markham and Conor Ryan, they have played football for Clare at every underage level from U-14.
Community centres in Lissycasey, Kilmihil and Cooraclare were packed on Monday night for the visit of Liam MacCarthy, who was escorted by the Collins brothers, Brendan Bugler and Louis Mulqueen.

Speaking before he left Cooraclare, Seán said he would love to give inter-county football a crack, if possible, particularly as his father, Colm, has been confirmed as manager on a three-year term.

“I have always had a huge interest in football, as much as I have in hurling. I go to as many club matches as I would hurling. If it was possible, it is something I’d love to do. But whether it’s physically possible or not, with work and the level of commitment that will be required from both managements, I don’t know,” he said.

“We’ll just concentrate on Cratloe for now and when that’s finished, we’ll sit down and have a chat and see what happens. But it’s something I’d love to do in an ideal world,” the elder of the Collins brothers reiterated.

Podge, who like Seán has represented the Clare footballers from U-14 to senior, acknowledged the possibility of playing football for Clare next year has been mentioned once or twice at home.

“It’s definitely a talking point at the dinner table at the moment. We’ve a few more weeks to think about it. We’ll see how Cratloe go first and take it from there,” he said.

Podge was amazed at the reception in Lissycasey, Kilmihil and Cooraclare.
“The crowds that turned out were phenomenal. We didn’t expect it at all. It really sends home what it [winning the All-Ireland] meant to the county. It’s great to get points across and get the young lads thinking positively. That’s what winning All-Irelands has done for a lot of counties. This has brought a positivity to Clare and with the recession, it is great to have something like this to pick up people’s spirits and get people out socialising and meeting each other,” the hurler of the year nominee said.

Seán recalled a pre-All-Ireland panel visit to Doonbeg.
“West Clare people are absolutely crazy into their sport, whether it be Gaelic football or hurling. Brendan [Bugler] was saying it earlier that when we were going to Doonbeg before the All-Ireland, the colour around Mullagh, Quilty and Doonbeg was unreal. It just shows that once the county is doing well in either code in GAA, the public gets behind the team,” he noted.
Podge acknowledged winning the All-Ireland brought with it an added responsibility for the panel.

“We talked about that the day after the All-Ireland. It was said that we were going to be in a lot of spotlight over the following weeks and that we had to represent ourselves well and get the point across to younger kids about working hard and staying focused,” he said.
Although they have left their hurleys aside for 2013 at club and county level, Seán and Podge are this week preparing for Sunday’s county senior football semi-final against Éire Óg.

“We scraped through against Kilrush. We weren’t happy with our performance but we got through it anyway. I’m delighted to get back playing. It’s great to focus on something again, trying to bring Jack Daly to Cratloe. It’s going to be a tough one on Sunday but we’re looking forward to it,” Seán said.

“We were gutted about the hurling. We gave it our all against Crusheen [0-16 each] but it just wasn’t enough. We said if we’d lost, it would be easier to take but I suppose we lost it the first day against Inagh-Kilnamona. A lot of us were very disappointed for a few days after the match but we just said we’d give the football a right go. We’re going flat out for that now,” the Galway-based Cratloe man added.

Podge has found playing football somewhat of a release from playing high-pressure games in Croke Park.

“You’re playing hurling all year and we hadn’t really got a chance to play the football. We love the football as much as the hurling down in Cratloe. It’s almost a new lease of life. It’s a completely different game, so you’re mad to go. Hopefully, we can retain that hunger for the next few games. We didn’t really play that well last Sunday. We kicked away a lot of ball. It probably wasn’t a good game to watch. As for the semi-final, we know how good Éire Óg are. We played against them enough underage. It’s going to be a very tough game,” he forecast.

The Collins’ visit to Kilmihil was a particularly proud moment for their grandparents, Cyril and Annette Collins.

“They came down to the community hall in Kilmihil and we went up to their house then for a bit of dinner. A lot of people said how proud they were. It does mean a lot. It was great to go back to Kilmihil to see them,” Podge smiled.

West Clare native Peter O'Connell has worked for The Clare Champion for 12 years and covers everything from sport, especially GAA, news, features and has been even known to branch into the fashion scene on occasion.
@@westclarepage
Previous Plans Lodged for new Tulla school
Next Zurich fixed in Sean’s Sights