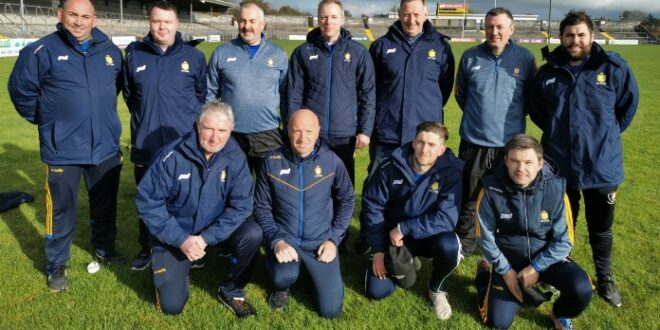 The honour of being the first Clare hurling team to embark on their 2020 championship campaign falls to the Banner’s minor outfit this weekend as they take on Cork in the Munster quarter-final on Saturday afternoon.

Brian Coffey’s charges go up against the Rebels in Semple Stadium with a 1pm throw in for the right to meet Limerick in the last four in two weeks time.

The fate of the minor and U20 championships for 2020 had been in doubt in recent weeks as Covid-19 restrictions left question marks surrounding how they would proceed. Those fears were allayed last week with confirmation that they would go ahead behind closed doors, but it was outlined that one parent or guardian per player could attend games at the minor grade.

Banner GAA clubman Coffey, who has been with this crop of youngsters through the underage ranks, admits while the uncertainty was not ideal, they have not allowed it to affect how they prepared for Saturday’s game.

“We have been wondering for quite a while now as to whether it was going to go ahead or not. Even as late as last week there was a lot of uncertainty around it. The GAA leadership met and there were some discussions around whether or not it was going to go ahead but they finally made a decision that it is full steam ahead and we are really looking forward to it now. Our approach all through the year really has been to prepare for this as if it was going ahead. Even during the lockdown the lads were working away so that when we got back together we were going straight back into it and we didn’t really taper off at any point, even with the uncertainty around it. From a players point of view, they probably did not realise some of the uncertainty that was going on in the background” he noted.

Clare will have to plan without one of the standout players from the minor club championship with Feakle-Killanena attacker Keith Smyth ruled out with a broken collar bone. Coffey noted that some players came on to their radar during the club championship and have proven to be big additions to the squad.

“It was great to be able to see the lads playing with their clubs and I thought it was a great club championship. We made sure that we had somebody at almost every game over the few weeks so we got to look at all of them in action and it was great to see them performing well for their clubs. We brought in a few players as a result of the championship and they have continued to impress since they joined the squad so it was very worthwhile from that perspective” he stated.

As part of the recent Covid-19 restrictions, challenge games at minor and U20 level were banned and Coffey admits while it not ideal, he is confident they will still be ready for the challenge ahead.

“It was disappointing. We had a game lined up against Galway last weekend which would have been a good test but every county is in the same boat really. From talking to some of the other managers, they had their own internal games instead and that is how they dealt with the situation. I think once everyone is in the same boat, it is just what we have to deal with. It has been a short run in and we are limited in the number of sessions we can have due to the Covid-19 protocols from Croke Park, but again every management team is in the same boat there. We are happy with what we have been able to do and the lads are hurling well. They are just really looking forward now to getting going against Cork at the weekend” he said.

Games between Clare and Cork have been competitive when they have clashed with these two groups at the various age grades. Both have also claimed All-Ireland titles, with Clare winning the U15 Arrabawn Tournament under Coffey’s watch while Cork are the current U16 champions. Coffey is expecting another tight battle with the Rebels on Saturday.

“I don’t expect there will be much between the sides at the weekend and it will really just come down to whoever performs best on the day. There is nothing between the teams so it will all come down to the performance. It is back to the old days in the knockout format so everyone knows it is a case of do or die and there will probably be a bit of extra pressure on us as a result of that. That is what you would expect from knockout championship hurling and that is what we all look forward to in some ways” he said.

The championship experience will be much changed from other years with the game being played behind closed doors on Saturday afternoon. Munster GAA have confirmed that the game will be streamed on pay-per-view, with details available on the Munster GAA website. Coffey admits while it will be a strange experience, the precautions are necessary in unprecedented times.

“It might affect different players in different ways. It is not exactly what we had been looking forward to and it is disappointing for everyone that crowds can’t be there. We understand why that has to be the case in the current situation and we are just fortunate that the games are going ahead at all. There will be limitations in terms of the numbers of players we can bring, the number of parents that can attend and even in relation to the amount of people you can bring as part of your backroom team. It is going to be a very different championship day out for sure” he stated.