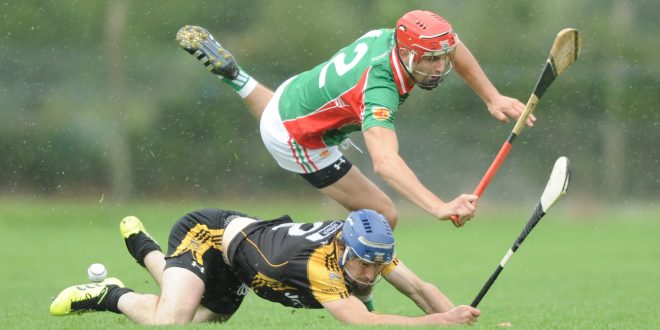 Seventy five years after they last appeared in the Clare senior hurling championship final, Clooney-Quin are one step away from Clare’s top hurling honour.

A contribution of 0-13 from Peter Duggan played a key role in their victory in this evening’s semi-final win over a fancied Clonlara side who had contested the finals of the past two years.

In a game in which they were never behind, Clooney-Quin emerged as deserving winners but there was a period in the final quarter when their followers were nervous as Clonlara landed five points in a row to come to within a point of their opponents.

Jimmy Corry gave them the lead inside the first minute and Peter Duggan struck for his first in the second minute before Ian Galvin opened Clonlara’s account.

The sides were level four points in the first half at the end of which Clooney-Quin were two points clear, 0-9 to 0-7 having played with the assistance of the breeze which didn’t have a major bearing on the game.

The winners should have had a greater lead at the interval but Duggan had failed to find the target from a couple of frees in the first quarter. They also missed a great goal chance in this period when Ger O’Connell was quickly off his line to deny Ronan O’Donnell who looked certain to find the net.

Clonlara closed the gap to the minimum in the second minute of the new half but that was as good as it got for the South Clare outfit. Three Peter Duggan points followed before the tenth minute by which time three Clonlara players had been shown yellow cards.

Clooney-Quin were clearly growing in confidence and as the game entered the final quarter they were five points clear. Another Duggan free stretched their advantage to six with twelve minutes remaining and Clonlara clearly needed change. The introduction of Cian Moriarty helped as they landed five points in as many minutes to trail by the minimum with six minutes remaining..

Momentum appeared to be with the finalists of the last two years but a Peter Duggan point from a 70m free lifted the winners.

Four minutes of ‘injury time’ were signalled and in the fourth of these a foul on substitute Micheál O’Loughlin gave Clonlara a 20m free. Colm Galvin’s effort for a goal was saved and the final whistle followed setting off tremendous celebrations amongst the Clooney-Quin players, officials and followers.

Shane McNamara, Conor Harrisson, Cillian Duggan, Ryan Taylor, and Peter Duggan stood out for the winners while Garath Kennedy, Colm Galvin, Cathal O’Connell and Ian Galvin, in the first half, did best for Clonlara.

Meanwhile, O’Callaghans Mills won the senior B title with a 3-16 to 1-15 win over Inagh-Kilnamona who played the last twenty five minutes with fourteen men after inter county man David Fitzgerald was sent off on a straight red card

Elsewhere this afternoon Kilmaley qualified for the intermediate hurling final with a comfortable 1-17 to 0-11 win over Parteen, the goal coming from Padraic McNamara in the opening half