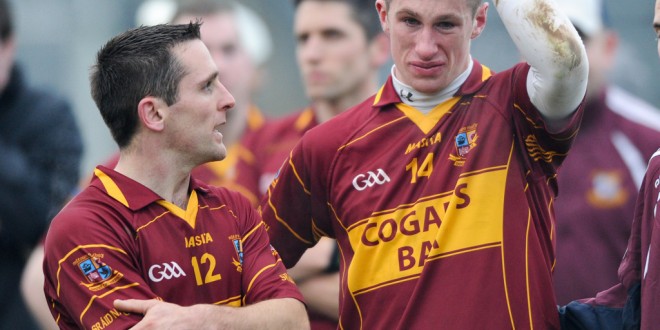 Miltown's captain Brian Curtin (left) and Eoin Cleary helped their side to victory over Cooraclare at Doonbeg.

Clondegad live to fight another day

For the third time in recent weeks an injury time point has kept Clondegad’s senior football championship hopes alive.  At Kilmihil on Saturday, Paudge McMahon converted a free in the sixth minute of ‘injury time’ to force a replay with Doonbeg in their quarter final tie. It was a result most will argue was deserved as they had wasted a lot of scoring opportunities throughout a tie in which they trailed by two points at half time.

At the same venue holders and favourites Kilmurry-Ibrickane overcame Eire Og but they were given a much sterner test than many had expected. At the final whistle they were four points clear, 0-12 to 0-8.

In a repeat of the final of two years ago, Miltown St. Josephs again came out on top when they accounted for Cooraclare at Doonbeg where the Cleary twins Eoin and Conor excelled, contributing nine of their side’s points.

The winners dominated the opening half and led by seven points, 0-8 to 0-1 at half time. They had the opening score of the second half but then Cooraclare got a grip on proceedings and landed four unanswered points. At the three  quarter stage the margin was six (0-11 to 0-5). Cooraclare continued to press and had Miltown’s lead down to three (0-12 to 0-9) with just under ten minutes remaining.

The decisive score came in the 54th minute when Cormac Murray found the net and while Coorclare responded with three points, the game’s only goal proved vital as Miltown marched into the semi-finals.

Meanwhile in the remaining third round game Ennistymon accounted for Lissycasey on a final score of 3-9 to 1-13. This was a game that had many talking points including two penalties for Ennistymon and red cards for two Lissycasey players in the closing stages.

On a day when Sean McConigley converted both penalties for the North Clare side, their substitutes,particularly Conor Dillon and Michael Leigh, made valuable contributions.

St. Senans Kilkee will play intermediate football in 2018 after they lost their relegation final to Wolfe Tones. A late goal proved crucial for the Shannon men in their 2-7 to 0-11 win.

St. Josephs Doora-Barefield will contest the senior B championship final after they accounted for Corofin on a 2-7 to 0-9 scoreline. They await the winners of the O’Currys v Lissycasey clash.

In the intermediate championship Kilrush and Kilmihil justified favouritism when winning their semi-finals with Kildysart and Coolmeen. Nine unanswered points in the second half helped Kilmihil to a 1-19 to 0-9 win over Coolmeen while Kilrush had six points to spare when beating Kildysart 1-11 to 0-8