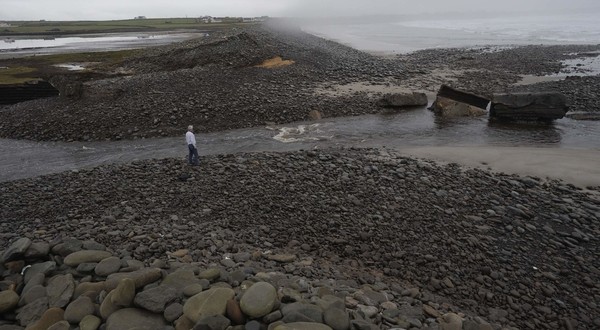 A view of the sea defence at Clohaninchy, Quilty where the water surged and washed away the material between Lough Donnell and the sea. Photograph by John Kelly.

Clohaninchy coastal works could be ‘years’ away

One of the communities worst hit in the January and February storms may have to wait years for permanent coastal protection works, it emerged this week.

Clare County Council estimated in February that coastal protection works at Clohaninchy, near Quilty, would cost in the region of €4.7 million, the second highest cost of “remedial works” in an individual area in the county after Lahinch (€6.064m).

This week, the Clohaninchy Action Committee received a letter from the office of the Minister of State with responsibility for the Office of Public Works saying a new coastal protection project is not eligible for funding because money made available was for “repair” of damaged coastal protection infrastructure.

The letter was in response to an email from committee chairman Michael Neenan to then Minister Brian Hayes, on May 14, reminding him of his visit to the area in January and requesting “favourable consideration” for funding for a structure to permanently protect homes and properties from future high tides and storm damage.

The OPW’s reply to Mr Neenan on Tuesday scuppered hopes of this. The letter stated the submission by Clare County Council to the Department of the Environment, Community and Local Government “included an estimate of the cost of construction of a new coastal protection structure at this location. However, funding the cost of undertaking major new works such as this was not part of the Government decision”.

The letter went on to place responsibility for the necessary works at Clohaninchy with Clare County Council.
“A major scheme of coastal protection works, such as may be required at Clohaninchy, requires detailed investigation and planning, including the carrying out of a preliminary feasibility study and report. This is a matter for Clare County Council to progress,” it concluded.

Mr Neenan said residents of the area are very “disappointed by the way this has been handled”.
“It is absolutely disgraceful. There is a lack of communication between county councillors, the county council and the politicians. We have six months wasted. Now we have to go back to the drawing board again with the county council and there will have to be a proper Environmental Impact Study, as was done in Quilty in 1998 before they carried out major coastal protection works there,” he commented.

“Six months down the line, we have got nothing. I was told by the OPW office [on Wednesday] that the ball is back firmly in the county council’s court now to do a proper study, apply for planning and then for funding. You could be talking anything up to two years before you would get all that put together. It could be even longer,” he added.

Mr Neenan said residents are unsure where the fault for this six-month delay lies but added, “there has been a total lack of communication between all bodies”.“I’m not criticising anybody here, between the councillors, the county council and the OPW office,” Mr Neenan said.

A spokesperson for Clare County Council said the authority had made a submission to Government for funding for all projects in the county and that it “is awaiting a decision regarding its application for funding. While Clare County Council was advised in April that €16.8 million was being committed to storm repair work in County Clare, the total cost of the damage stands at €36.8 million”.

Mr Neenan expressed his disappointment that it took six months to find out that the OPW would not provide the €4.7 million necessary and that residents of Clohaninchy could end up waiting another two years for coastal protection.

“I think it has been mismanaged. Someone has made a big booboo along the line. Until they put their hand up and start afresh and start being honest with the people because it is people’s lives, they are playing with here. It is the people who are facing into another winter and don’t know what to expect or how high the sea will be for the storms and they are back further than they ever were because we had a bit of hope all along. Now, there is no hope until the council admits there is a problem there and it is going to cost serious money to get a proper study done. You don’t do that overnight. That will take a long time. Then you are costing and you are planning.

“You are talking about a long time down the road. So we are very disappointed by the way it is being handled and we won’t start naming names to blame anyone but it has been mishandled,” he said.

“We are facing into a harsh couple of winters now with the temporary protection there and the only thing I would say now is that, hopefully, we won’t get the tides and the storms we got last January. If we do, a lot of people could be in serious trouble. That is the only thing we could hope for now. We are in the lap of the gods now as to what is going to happen,” Mr Neenan concluded.

“We were told €38 million was requested by Clare County Council for the coastal protection programme and that Clohaninchy was included in that proposal. I am disappointed to be told now, after all the requests made by myself and other councillors in the West Clare Municipal District, that this is not now going to happen and the people of Clohaninchy will probably have to wait two to three years before any coastal protection work will be carried out in that area.”

Councillor Slattery called on the council to repair and resurface the road from Clohaninchy Cross to Seafield Cross, including the bridge, and to fund this from the €16.8 million already allocated to the local authority for remedial and repair work.

“The council said up to this that they wouldn’t do the road because trucks bringing rock armour for coastal protection would do serious damage to it, but I feel, at this stage, there is no point waiting any longer for this work to be carried out, as a final decision on the coastal protection programme could take years,” Councillor Slattery concluded.