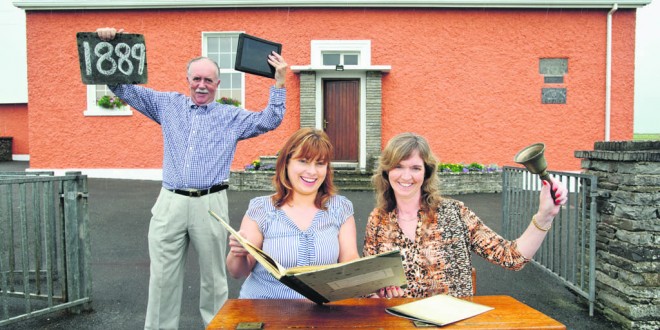 CLOHANES National School in Doonbeg will mark its 125th anniversary on the weekend of August 15 to 17. The 44-pupil, two-teacher school also has a resource teacher, along with a special needs assistant and a school secretary.

The committee established to mark the milestone, and chaired by Mick Carrick, has produced a very informative 160-page book, which details the long history of the school.

School principal Aideen O’Mahoney is a past pupil and, intriguingly, was her mother’s boss when she was appointed to her current post in 1993.

“My mother (Marie Shanahan) taught me in the junior classroom for four years. Then, when I came back in 1993 as principal, I was my mother’s principal for nine years,” Aideen said.

So how did that work out? “We got on well. As I often said, I was the principal, she was the boss. She showed me the ropes. She knew everybody, knew the locality and knew all of the families. It was an easy way to get started off when I had that back up,” Aideen smiled.

While Aideen is relatively content with the school population at present, numbers are a constant concern for rural schools.

“It is a healthy number for a small school but earlier this year (former education minister) Ruairí Quinn put pressure on small schools to increase the number to retain two teachers. We’re going to have blips in population. While we have 44 now, the bigger number is at the senior end of the school at the moment. We are going to come to that dip as well, so now is the time you’d encourage all of the locals to attend the school and support it, which they do and which is why we are doing so well,” she said.

The 125-year celebrations will start on August 15. “On the Friday evening, we’ll have mass in the marquee at 6.30pm, which will be concelebrated by a number of priests. Fr Martin Blake will be the chief celebrant. He’s a past pupil of the school,” Aideen said.

Following the mass, the Clohanes National School book will be officially launched by INTO president, Seán McMahon.
“His mother was a past pupil. In 1989 we had centenary celebrations, which were very successful so, at that stage, we had earmarked the 125 celebrations, never realising that it would come around so fast. After the book launch, we will have some of our local musicians playing and some of the children are going to dance and play music,” Aideen explained.

Saturday will feature a family day from 2pm to 5pm, while Patrick Roche and his band will play in the marquee that night. The weekend long anniversary celebration will conclude on Sunday, August 17 when the school will be open from 2pm to 5pm, which will give former pupils an opportunity to revisit their school days, even if only for a few hours.

Bishop under fire from priests