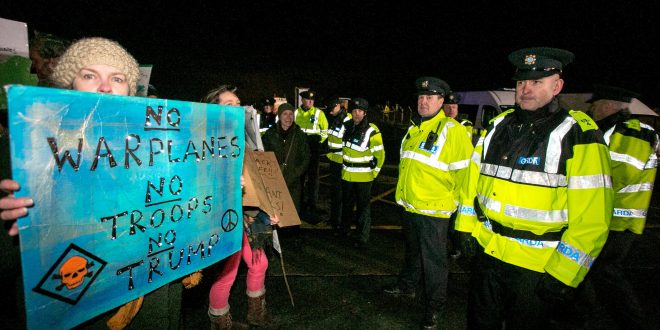 A protest at Shannon Airport over US military landing.

IN the early days of the Trump presidency hundreds of people came to Shannon Airport on a dark winter’s night to protest his immigration policies.  Trump was almost certainly unaware of the gathering, thousands of miles away, as he got accustomed to life in the White House.

Protestors will be gathering at the entrance to the airport again next week, and this time there is at least the possibility that Trump will gaze upon them as he descends from the skies, or that his advisers will inform the president there are people outside who disagree with him.

A statement this week sent to the Clare Champion on behalf of three groups, Shannonwatch, Futureproof Clare and Extinction Rebellion, said, “To coincide with US president Donald Trump’s visit to Ireland, protests will be held at Shannon Airport, starting at 3pm on June 5th. The US president is expected to land at Shannon that day, to fly out and back again on June 6th, and to leave on June 7th.

“A Peace Camp will be set up outside the airport for the duration of his visit, and people are invited to spend whatever time they can there in order to maintain an ongoing protest against his presence in Ireland.

“The main protest will take place at 6pm on June 5 just outside Shannon Airport. It is being organised by local groups Shannonwatch, Extinction Rebellion Clare, and Futureproof Clare, and is supported by the Ireland Palestine Solidarity Campaign, Gaza Action Ireland, the Peace and Neutrality Alliance, the Irish Anti-War Movement, Veterans
for Peace, and Galway Alliance Against War.”

For years now Shannon has seen regular protests against the use of the airport by the US military, but climate change protests certainly aren’t regular events there, and the alliance between the movements is new.

Edward Horgan of Shannonwatch said, “Trump’s greatest danger to humanity arises from two closely related areas. The first is climate change denial and wanton destruction of our living environment. The other is unjustified wars of aggression, motivated largely by the desire to steal other countries’ resources. Oil-rich Venezuela and Iran are the most recent targets for Trump and the US.”

He added, “The US military has become the world’s greatest destroyer of our environment, in addition to using up a huge proportion of the world’s scarce resources. And since 2002 successive Irish governments have allowed them to use Shannon Airport to do just that.”

The organisers say that the protest is not just against Trump and US policy, but also against the Irish Government’s decision to allow the US military to use the airport, which they claim is a breach of neutrality.

They say letters will be handed for delivery to President Trump and the Taoiseach, while they also say it will be a family friendly event and all forms of peaceful expression are welcome.

Organisers are asking protesters to park at Shannon Town Centre, where they will be directed to walk along the Drumgeely road to the peace camp and demonstration point closer to the airport.

While Trump, or Leo Varadkar for that matter, are unlikely to change policies due to the protest, they will at least be made aware that there are dissenters out there.

Owen Ryan has been a journalist with the Clare Champion since 2007, having previously worked for a number of other regional titles in Limerick, Galway and Cork.
Previous Flynn takes last Shannon seat after dead heat
Next €900,000 cannabis grow house discovered