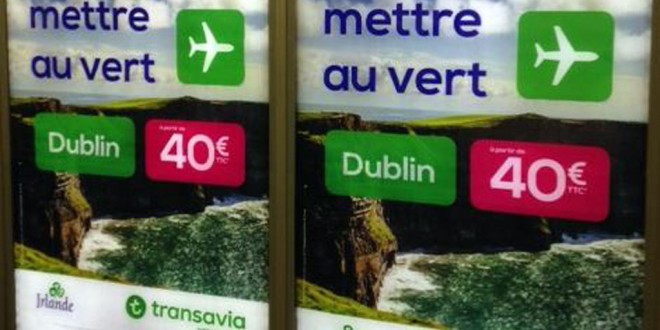 Billboards in the Paris Metro dadvertise the Cliffs of Moher

Oh là là! The Cliffs of Moher take to the Paris metro

Millions of French commuters are seeing ads for Ireland on large billboard posters as they pass through the busy metro stations of Paris.

Tourism Ireland in Paris has teamed up with French airline Transavia to highlight the new daily flight from Paris-Orly Airport to Dublin, which is due to begin on 1 June.

The campaign with Transavia includes some 550 ads in the Paris metro highlighting great value fares to Ireland, which are grabbing the attention of commuters with a beautiful image of the Cliffs of Moher – and reminding them why they should put Ireland on their holiday wish-list for 2015.
It includes online advertising and a competition on Facebook.

This is the first time that Transavia will fly to a northern European destination. Ireland is not currently served from Orly Airport – so the new flight represents an important opportunity for both leisure and business tourism from the all-important French market.

France is one of our top four tourism markets, delivering about 455,000 visitors to Ireland last year.