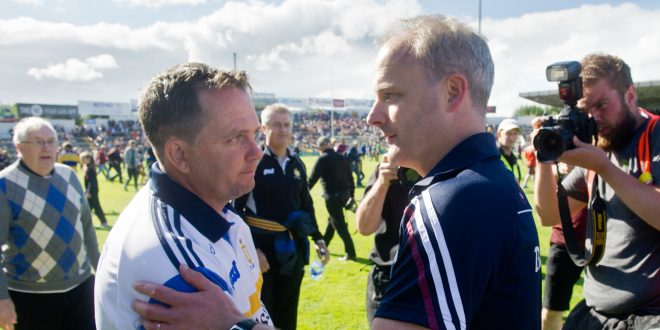 Clare’s All-Ireland dream is over for another year

Clare’s dream of adding the All-Ireland senior hurling championship title to the national league crown won earlier in the season is over.

Before an attendance of 31,690 at Semple stadium in Thurles yesterday, they went under to neighbours Galway on a day when the Tribesmen’s aerial supremacy proved decisive.

Clare failed to match Galway’s physicality and can have no complaints with the result. Joe Canning, not for the first time, proved a key figure in Galway’s victory, the Portumna man’s goal twenty seconds into the second half putting the winners ten points clear and leaving Clare with a mountain to climb.

A Conor Cooney goal after fifteen minutes helped Galway to a 1-10 to 0-6 half time lead after they had played with the aid of a fresh wind. It was a lead they deserved as they had dominated the exchanges in a majority of positions.

With Colm Galvin creating some opportunities Clare replied with points from Kelly(free) and Galvin to level the game at 0-3 each after nine minutes.

A Canning free had Galway back in front before Conor Cooney fired low past Andrew Fahy and from here to the finish of the half the Tribesmen had the better of matters.

Trailing by seven points at half time, Clare needed a good start to the second half but they were rocked straight from the throw in. David Burke won possession from the throw in and raced through the Clare defence, surprisingly easy it must be said, before passing to Canning whose piledriver gave Andrew Fahy no chance in the Clare goal.

Clare responded with three unanswered points and by the three quarter stage they had the winner’s lead back to six points. They had it back to four with ten minutes remaining but that was as good as it got.

Joe Canning spent much of the final quarter helping out his defence, a defence which Clare simply could not break down.

On a disappointing day for Clare hurling, Colm Galvin did well, contributing five points from play while substitutes Conor McGrath and Colin Ryan each scored a brace of points.