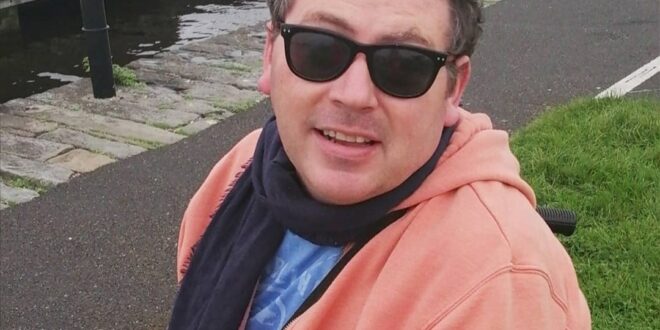 CLARECASTLE’S Brian Hogan is celebrating after being named an Inspirational Hero following a nationwide search to uncover Ireland’s most inspirational people.
Nominated by family and friends for the Gala Retail and Virgin Media Inspiration Awards, Brian stood out for this determination and positive attitude. In 2009 Brian suffered severe brain damage after an unprovoked attack left him blind and partially paralysed. However, he hasn’t let that stop him.
Originally from Ballykeeffe in County Limerick Brian who lives in Acquired Brain Injury’s (ABI) residential service in Clarecastle went from needing to use a wheelchair to taking on a mammoth walkathon challenge. Unable to see his family Brian set himself a goal of walking the equivalent of 20 laps of Thomond Park before the end of May and raise funds for Acquired Brain Injury Ireland Clarecastle. Brian surpassed his fundraising target, raising over €10,000 for the Clarecastle services.
Speaking to us about the fundraiser earlier this year, he said, “Acquired Brain Injury Ireland are giving me back my independence, so I want to give back to them. Where there is life there is hope.”
Brian was attacked on July 19, 2009 while on a night out in Nottingham where had been living and working. He hit his head off of the pavement after a single punch from a stranger, and suffered an internal bleed to the brain. A surgeon worked on Brian for five hours, and he was put into an induced coma for three months. When he woke up he discovered he had lost his sight and ability to walk, facing a long road of rehabilitation and recovery.
In 2012, Brian underwent stem cell infusion surgery in China, in the hopes that it might help him regain his sight and ability to walk. Though his family were told by doctors in Beijing that it could take six to eight months before the stem cells would take effect, they began to see some small signs of improvement a few months after his treatment. Coupled with physiotherapy, Brian’s mobility along his left side improved.
Inspirational people from across Ireland were nominated for the Gala Retail and Virgin Media Inspiration Awards, with 26 inspirational county heroes being named from the hundreds of entries received. Each of the 26 award-winning heroes demonstrated how they have made Ireland a better place with their selfless acts and inspirational deeds during the Covid-19 crisis, and how they have gone above and beyond for others in their local community.
To donate to Brian’s fundraising efforts for ABI check https://www.facebook.com/donate/1393556027518288/?fundraiser_source=external_url