Home » Regional » Ennis » Clarecastle urged to row in behind regatta

Clarecastle urged to row in behind regatta

FOLLOWING the “tremendous success” of last year’s Clarecastle Regatta, organisers are optimistic that people from all over the county will once again row behind the event by coming out to enjoy the fun.
The 2012 Clarecastle Regatta takes place on Saturday, July 14 at the quayside, starting at 1.30pm. This is the third regatta to take place since 2010 following an initiative by the Clarecastle GAA to revive the regatta after a lapse of many years.
“This year’s event has a huge variety of attractions and if we are lucky enough to be blessed with similar weather to last year, it promises to be a great family day out,” said Veronica Talty, secretary of the regatta committee.
All proceeds from this year’s events will go to three worthy causes: Sr Mary Barry’s Mission in Kenya, the local branch of the St Vincent de Paul and the Clarecastle Development Committee Playground Fund. Entry to the quayside is free, however, there will be a bucket collection for the nominated charities.
The first event of the day is a 10k Road Race/5k walk beginning at 10.30am from the GAA Club House in Clarecastle. Registration will take place from 9.30am to 10.15am.
The regatta will commence with a fancy dress parade, which will make its way down the quay in time for the official opening. All those walking in the fancy dress parade will assemble at the church carpark at 12.30pm and all floats will assemble at St Joseph’s Terrace at 12.15pm.
“We have a variety of entrants – vintage cars, horse and floats, motor bikes, among others, which will all be led by pipers and all the walking entrants will link up with these at the church car park and parade down to the quay side in time for the official opening at 1.30pm. This should be a spectacular event and we want all the locals to come out, cheer and join in the fun if they are not taking part,” said Veronica.
The regatta will be officially opened at 1.30pm by Fr Brady with the blessing of the boats and the Mayor of Clarecastle Sinéad Reidy and Clare Rose Orla McDonagh will be there.
The first event taking place on the river is a kayak race and this kicks off at 1.30pm. Local fishermen will give boat rides on the river throughout the day. In the late afternoon, 1,000 ducks will be released on the river for a duck race.  First prize for the winner is a two-night hotel break and second prize is dinner for two.  Ducks can be purchased from local businesses and can also be bought on the day at the quayside.
Fergus Rowing Club, which is now in its third year is a pivotal part of the regatta. “Members of this club compete with the best in Ireland and are showing that training and dedication pay off,” said Veronica. The club has been represented in local and national regattas and has taken part in the Great River Race in London and the Ocean to City in Cork.
As with all clubs, Fergus is looking to the future and to ensure its long-standing place in the Ennis/Clarecastle community, the club have begun a training programme with U-18s and hold a club night every Wednesday at 7pm in both Ballyalla Lake and the Quay Clarecastle, which is open to anyone who has an interest in racing currachs or simply enjoying a row on the beautiful Fergus.
The first race of the day begins at 2pm and races will be run throughout the afternoon. “The rowing club and the regatta committee encourages everyone to come along and view this spectacular event,” she said.
There are also many events taking place on the quayside – children’s races, bouncing castle, market stalls, bucking bronco, best dressed lady, glamorous granny, apple tart and baking competition, Imeco farm with animal display, raptors, vintage car display, face painting, puppeteer, dog show, clay-pigeon shooting, horse and carriage rides and the day will finish with a singing competition, which was keenly contested last year.
“There will be tea/coffee, sandwiches, burgers, ice-cream and candyfloss available on the day so come along at 1.30pm and have a fun-filled family day,” she concluded.
There will be traffic restrictions in Clarecastle on the day of regatta from 10.30am due to the road race and restrictions coming in from Ennis side into Clarecastle from and 12.30pm to 1.30pm, due to the parade. 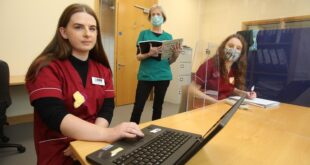