A NORTH Clare woman will highlight her talents to an international audience when she produces a show as part of the 15th annual Dublin Fringe Festival taking place later this month.
Emma Pearson, who hails from Ennistymon, has performed in the festival for the past five years but this year has taken the plunge, coming up with her own show, titled Crash Test Cabaret.

“It is very exciting to be in the festival. I have performed in it for the last five years in other people’s shows but this is the first time I’ll be producing my own show.
It is quite difficult to get into the fringe. You have to submit a proposal but it has to be very detailed and very strong to get selected,” Emma stated.
Emma’s family is originally from the UK but her parents moved to Clare, from Leitrim, when she was a teenager. She was educated at the Convent of Mercy, Ennistymon and Salesian Convent, Kildysart, and is now based in Dublin after studying in Manchester and working in British television for some years.
“I’m back in Dublin since 2000. I have been performing for five years in theatre shows in Dublin and I am also in a burlesque troupe called the Pony Girls,” Emma says of her diverse interests.
Crash Test Cabaret will take place in FilmBase in Dublin’s Templebar on September 15, 16 and 17 at 9pm each night. The show is a modern twist on cabaret and will feature a number of acts and will include audience involvement.
“What we have tried to do is take the idea of cabaret and give it a face-lift and bring in to it modern ideas. We will have three or four guest performers each night and they will have to do the Crash Test Challenge.
“The Crash Test Challenge is where we have taken random topics, put them in a top hat and drawn out ideas which we have given to each performer. They are given the name of a ‘celebrity icon’ including the likes of Jordan and Daniel O’Donnell. They are then given a random style of performance drawn from the hat, like modern dance, for example. They are then given random props such as chocolate pudding or a ball of string and a creative art form such as photography or painting. The people then make a performance out of each of these four things,” Emma explained.
“The performers are experienced but this gets them to test their skills and do something brand new. Then we also have a cabaret troupe of seven people and they have to mix contemporary culture with comedy and cabaret. One of the numbers they have come up with is the CSI Jazz Hands,” she continued.
Emma has been involved in burlesque and drag performance for years and would love to see some people from North Clare coming to the show, where they would be made most welcome, she assured.
“I hope people will come because we will give them a rip-roaring night of entertainment but there will also be the excitement of seeing what people have done with these strange things they have been given and how they will manage to pull that into a performance. Then we also have an audience talent spot where a member of the audience can come up on stage and show what they can do. Then the audience get to vote for their favourite act out of everything they see,” Emma added.
To make a guest appearance on the show, book your ticket for any of the nights between September 15 and 17 inclusive and email details of your talent to crashtestcabaret@gmail.com.
For those who don’t want to take part, there are audience tickets available at dublinfringefest.ticketsolve.com. 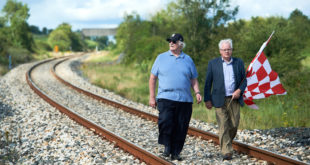