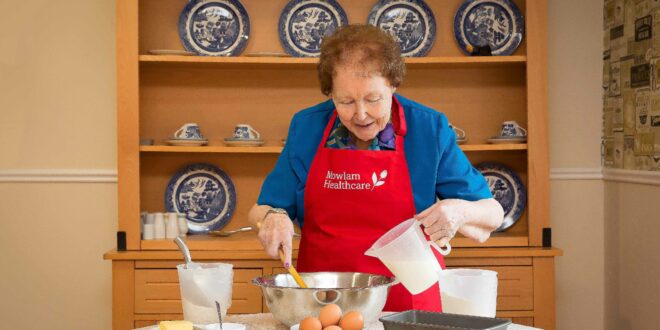 Cissie Collins, 91, the inspiration behind Mowlam Healthcare's Nursing Home Bake Off Recipes book, prepares one of her special dishes in the kitchen of Ennis Nursing Home, Co Clare.

A CLARE woman is flavour of the month after becoming the inspiration behind a new recipe book backed by celebrity chef Darina Allen. The time-perfected desserts created by the residents of Mowlam Healthcare will be remembered forever in the ‘Nursing Home Bake Off’ publication.
But the idea to gather a collection of residents’ favourite recipes from across Ireland was inspired by the trailblazing baking skills of a 91-year-old woman in Ennis Nursing Home.
Ardent hurling fan and Liverpool FC supporter, Cissie Collins, bakes scones and apple cakes for fellow residents during baking demonstrations hosted by her every Wednesday.
It soon became evident that there was a large group of enthusiastic bakers throughout the group – sowing the seed of a book with recipes from bygone days.
Cissie is one of the 51 kitchen-savvy pensioners living in Mowlam Healthcare nursing homes across Ireland who contributed recipes ­– some dating back three generations – and features on its front cover.
“I haven’t got a minute!” said the busy grandmother, whose Irish tea brack is among the 52 desserts.
“Every Wednesday, I give a demonstration here and we usually have people after lunch with some time to spare, and they come and watch it.
“I like it because I know it’s giving comfort to the other people who are waiting anxiously for it and that’s what gives me the joy.”
The 106-page book, which is not a commercial venture, transports readers into the heart of Irish kitchens to learn how to make simple, yet delicious, desserts. It also tells the stories of the exceptional men and women who shared their recipes.
Cissie is not the only Clare star of the show – the book also features 85-year-old Kilrush native Bernie, also based in Ennis Nursing Home, and her Christmas Cake.
She enjoyed drama in her younger days and was part of the Skibbereen Cathedral Players Drama Group in Cork.
Her family spans four generations with three children, four grandchildren and four great-grandchildren. Top chef Darina Allen backed the venture and gifted two of her own recipes to the book.
“I am so happy to support this inspired project, especially in the year that’s in it. Many wonderful recipes and stories of traditional home baking, with skills lovingly passed from mother to child down through the generations,” she said.
“Bravo to all the inspirational residents who contributed to the Recipe Book. How brilliant is it to see them living well and keeping up their skills in nursing home care. Keep baking and carry on.”
Joe Hanrahan of Mowlam said the group was “delighted to facilitate the compiling and production of this beautiful book”.
“What a fitting way to mark the end of our 20th anniversary year enhancing the quality of life of older people in Ireland. This would not have been possible without the dedication of our Mowlam teams in all our locations, with a special mention for our activity co-ordinators and catering teams.
“This book was a way of documenting recipes from yesteryear, learning from residents as well as supporting them to fill their days with meaning and purpose. While it has been different for residents in nursing homes due to the pandemic and restrictions on visiting, life did go on as normal. We are very proud that the skills and traditions of our residents are now in print and copies of the recipe book are being distributed to all Mowlam Healthcare homes.”

Previous Tributes pour in for the late Seán Hegarty of Carhugar, Lahinch
Next Clare’s online sales shoppers urged to know their rights