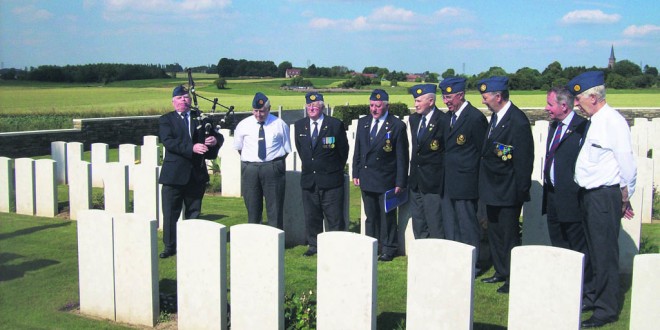 A number of Clare victims of the Great War were remembered by the members and friends of the local Roger Casement Branch of the Organisation of National ex-Servicemen and Women (ONE) during their annual visit to Flanders and the Somme, which coincided with the occasion of the 100th anniversary of the commencement of World War I in 1914.

The members of the Roger Casement Branch, all former members of the Irish Air Corps, were making their sixth successive visit to the battlefields and memorials to participate in the various ceremonies and to visit the graves of some of the victims.

The group of 19 members and friends was led by Paddy O’Meara, a former chairman of the branch and presently the deputy chairman, who has been a resident of Clarecastle for almost 30 years.
Brian Honan, a former member of the Reserve Defence Forces and a military historian from Kilrush, also joined the group.

The group took part in the ceremonies at Guillemont in the Somme and at the Menin Gate in Ypres, in addition to visiting other battlefields and memorials.

Visitors to the Somme and Flanders will be impressed by the large number of cemeteries which hold many thousands of graves and are located throughout the countryside. However, approximately half of those who died have no graves and their names are inscribed on the various memorials, such as the Menin Gate in Ypres and the Thiepval Memorial in the Somme.

Visits to individual graves are always a feature of the trips. A short military type service is performed at each grave, which includes the recitation of the Exhortation Prayer of Remembrance and is recited in both English and Irish, followed by a wreath-laying. The branch piper will then finish the ceremony by playing a lament or other suitable piece of music.

In excess of 600 Clare men and women were lost in World War I and in their honour, the group visited four Clare war graves and also visited two memorials where the names of Clare deceased are recorded.

Branch piper, John Brennan, played the melody of The Cliffs of Dooneen at the graves which, when played on the pipes, proved to be a very moving lament.

Honours were rendered at the graves of Tom Hill, John O’Loughlin, John Walsh and John Sullivan.
Corporal Tom Hill of the Royal Dublin Fusiliers was killed in action on September 7 1916. He is buried in Guillemont. He was born in Miltown Malbay, a son of the late Dr John Hill of Glendine House.

John O’Loughlin, Sapper with the Royal Engineers, was killed in action on January 14, 1915. Age 32, he is buried in Wytschaete Military Cemetery in Mesen, Belgium.

Born in Ennistymon, he was husband of Catherine O’Loughlin of Bogberry and they had four children, aged from four months to six years.

Lance Corporal John Walsh, (32), a member of the Royal Munster Fusiliers, was killed in action on June 7, 1917. He is buried in Wytchaete Military Cemetery, Mesen, Belgium.

Bombardier with the Royal Horse Artillery, John Sullivan was killed in action on October 17, 1917. Born in Kilrush, he is buried in Bard Cottage Cemetery, Ypres.

Memorials visited included the Thiepval Memorial in the Somme, which contains 74,000 names. The group also paid tribute to the memory of Private John Power of the Royal Dublin Fusiliers, who was killed in action on November 13, 1916. He was a son of Patrick Power, a coal importer from Clarecastle.

At the Poziers Memorial in the Somme, the name of Private Joseph Copely of the Royal Munster Fusiliers is recorded. Killed in action on March 22, 1918 at aged 19, he was son of William and Mary Copely of Chapel Street, Kilrush.

The branch plans to continue its visit to the World War One sites in 2015 and 2016 for the 100th anniversary of the Battle of Somme.

Paddy O’Meara and Brian Honan are members of the working group which is engaged in the planning of a monument to be erected in Ennis to remember the Clare War dead. Further information is available the on the Clare Peace Park website.

Previous Charlie has his paws on Bridgetown Show
Next Academic links J.R.R. Tolkien’s writings with The Burren 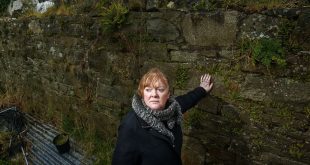 No evidence of babies buried in Kilrush