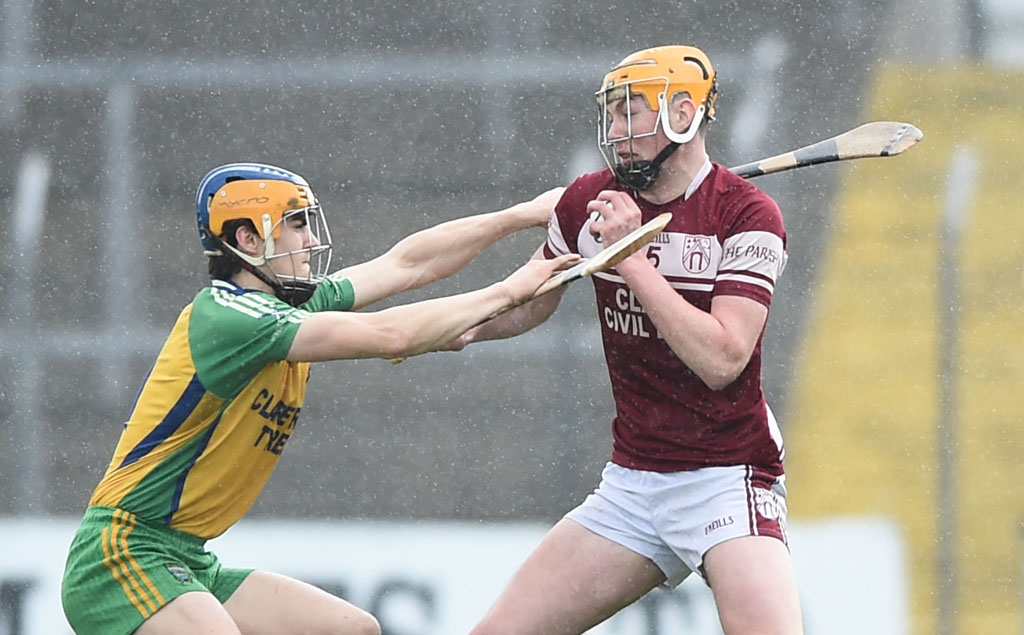 Aidan McCarthy of Inagh-Kilnamona and Clare in action against Cian Barron of St Joseph's during their U-21 game in Cusack Park. Photograph by John Kelly.

Since the U-21 Hurling Championship was introduced back in 1964, there has been some great times for Clare teams but with plenty of heartache as well.

In the 54 championships played, Clare have played in 19 finals, including one replay.

Thirteen may be regarded as unlucky for some but for the Banner the opposite was the case when the county finally got over the line on the 13th time of asking, claiming the title in Dungarvan in 2009. They went on to contest four finals in succession, winning provincial and All-Ireland titles in 2012, ’13 and ’14 before losing to Limerick in 2015. Many of the players on those teams helped the county to the All-Ireland senior title in 2013.

Facing into the 2018 campaign in what remains the only inter-county championship in which participants do not get a second chance, Clare could hardly have asked for a more difficult task. Next Monday’s first round game pits the Banner against Limerick, the reigning Munster and All-Ireland champions.

Despite the fact Clare go into the championship without a few key players due to injury, team manager John Carmody is happy with preparations.

Last week he expressed regret that Aron Shanagher (Wolfe Tones), Martin Daly (Feakle) and Cathal Noonan (Killanena) are all coping with cruciate injuries. Noonan is the latest casualty, having suffered his injury in a recent challenge game with Kerry. In Daly’s case, the Feakle man has returned to training but it is believed this game is a little too soon for the talented forward.

“We have a relatively young panel, with many of last year’s minor team included in the squad,” explained Carmody, who is in his second year as team boss.

Inagh-Kilnamona’s Jason McCarthy captains the team. A member of the county senior panel, he was a key player for his club when they captured the U-21 A title a few weeks ago. He is expected to lead the side from centre-back.

Clare contested the Munster minor final last summer, where they lost out to a fancied Cork, before going down to eventual All-Ireland champions Galway in a quarter-final tie.

As part of their preparations, a number of challenge games have been played but getting a full squad for these games wasn’t always easy due to clashes with college fixtures, club leagues and exams.That said, a big effort has been put in since the squad first got together back in November.

The team will go into Monday’s game (throw-in at 5.45pm) on the back of a narrow win over Kilkenny in a challenge game at Nowlan Park last week. Diarmuid Ryan (Cratloe) and Kieran Galvin (Clonlara), both of whom are expected to challenge strongly for inclusion in the starting line-up, were unavailable for that game.

Killian Nugent (O’Callaghan’s Mills) and Eamonn Foudy (Inagh-Kilnamona) are battling for the goalkeeper spot, with Nugent, last year’s goalie, likely to get the nod.

In contention for places in the full-back line are Conor O’Halloran (Éire Óg), Liam O’Connor (Newmarket), Ross Hayes (Crusheen) and Bradley Higgins (Kilmaley). Hayes could also be chosen in the half-back line, while others challenging to flank captain McCarthy are Diarmuid Ryan (Cratloe), Ross Hayes and Padraig McNamara (Kilmaley) and Cian Minogue (Bodyke).

Padraig McNamara is also in the running for one of the midfield positions, along with Cathal Darcy (Kilmaley), Kieran Galvin (Clonlara), Michael Corry (Clooney-Quin) and Darren Cullinan (Inagh-Kilnamona).
Among those battling for places in the half-forward line are Mikey O’Shea (Smith O’Brien’s), Padraic O’Loughlin (Clonlara), Colin Guilfoyle (Newmarket), Stephen Cownay (Feakle) and Aidan McCarthy (Inagh-Kilnamona), brother of team captain Jason.

Gary Cooney (O’Callaghan’s Mills), Billy Connors (Cratloe), Joe Carmody and Sean O’Loughlin (Kilmaley) and Killian Mullins (Crusheen) are chasing places in the full-forward line.
Corofin’s Damian O’Loughlin is a major doubt due to injury but, otherwise, all panellists are understood to be fit and well.

“As a group, we could not have asked for any more. Management have been meticulous in preparation and, hopefully, we’ll get a performance on the evening.

“Limerick beat us last year on their way to winning the All-Ireland title and seven of that Limerick team have played in the recently concluded national league. They are very strong and are warm favourites,” the Clare boss acknowledged.

The Shannonsiders will, it is understood, be without vice-captain Peter Casey from Na Piarsaigh, who is carrying a shoulder injury.

“That might cancel out Aron Shanagher’s loss to Clare,” Carmody commented.

Pat Donnelly is again in charge and his backroom team includes Mikey Kiely, Maurice O’Brien, Barry Foley and Liam Reilly, a new member of the selection committee this year.

While all Clare-Limerick games are generally very close, it will be a surprise if Limerick fail to progress to meet Tipperary in the semi-final.

Since the U-21 Hurling Championship was introduced back in 1964, there has been some great times for Clare teams but with plenty of heartache as well.
Previous Clarecastle solar farm ‘will not affect pilots’
Next Leader backs new plans for Tulla