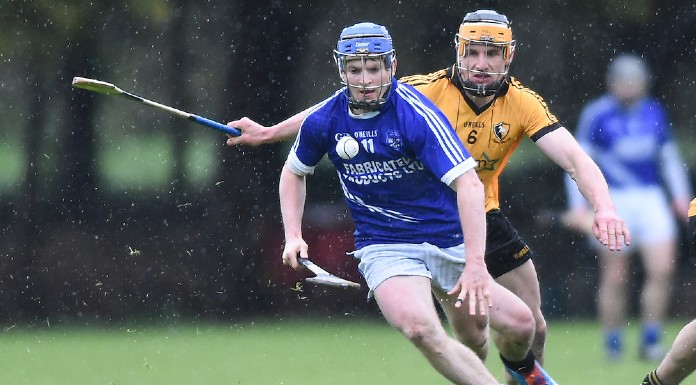 County team mates Podge Collins and John Conlon will be in opposite corners this weekend. Pic by John Kelly

This is one that the potential to be the tie of the round as two of the front runners for the Canon go head to head.

Clonlara carry the unbeaten tag after impressive victories over O’Callaghan’s Mills and Eire Óg en route to the last eight. John Conlon has been the man leading the line to date and with the Galvin and O’Connell contingents providing the back-up it has made for a potent combination.

Cratloe have been somewhere in the middle in both codes so far in the campaign. Defeat to Inagh-Kilnamona put an extra date in their hurling diary where they were impressive winners over Kilmaley while a resounding win over Clondegad in the football championship was followed by an equally resounding loss to Eire Óg.

Neither outfit are strangers to the knockout stages with both sides featuring in the quarter-finals every year from 2014-2017. The disappointment in both clubs will be that of those appearances, only one title has been garnered between the two with that coming in 2014 when Cratloe completed a famous cross code double. Their last championship clash came in the 2016 semi-final when it was Clonlara who came out on top before losing out after a replay to Ballyea in the decider. Cratloe were behind the band 12 months ago, but also had to give best to Ballyea.

The timing of this fixture has fallen nicely for Cratloe and with a free weekend just gone in the football championship, it will have been a welcome opportunity to rest the bodies. Clonlara have been out of competitive action since their win over Eire Óg four weeks ago so they will also be coming into the game fresh.

On paper it has all the makings of a classic. The aforementioned Conlon, Galvin’s and O’Connell’s will be key for Clonlara while young guns like Dylan McMahon continue to add to their growing reputations. For Cratloe, the return of Diarmuid Ryan and Shane Gleeson will be welcomed while they will hope Conor McGrath and Podge Collins continue to cause trouble around the middle third.

Alan Neville and his management team will need to come up with a plan to deal with the threat of Conlon on the edge of the square and it might necessitate a sweeper sitting in front of the battle that will unfold between him and Michael Hawes. The same is true at the other end of the field where Cratloe’s inside line of McInerney, Connors and Considine will have an edge to do the damage. Oisin O’Brien could well be sacrificed to take a step back and add another layer of protection and if that supply to the danger men can be minimised it could well be the winning of the game.

Cratloe’s recovery time coming into this game could well be a crucial factor. They have been struggling for form and energy until now and getting time to fill the lungs and refocus will stand them in good stead. There is a solid half-back line anchored by Liam Markham and Conor McGrath has been setting the tempo in the middle third. It looks to be a really balanced Cratloe outfit and while it will likely go to the wire, Cratloe should have enough to edge it.

Clonlara manager Dave Cuddy is thrilled with where his squad are mentally and physically, as they head into their much-anticipated clash with Cratloe this Saturday at 2:15pm in Cusack Park. Cuddy is under no illusions as to how tough a game this will be, but also explains his side have very real designs on lifting Canon Hamilton.

“It’s a tough game but it is a tough game for both sides. Cratloe are finalists last year and will be one of the favourites to win it, but we’ve gotten to this stage now and we want to push on and be competitive. We have ambition to go all the way too.

“The four-week break can be tough in one way but in other ways it allows us to get some injuries sorted, so there are pluses and minuses to it. I think we’re are in a very positive place but Saturday is going to be a big test. Cratloe are a very good side, lots of forward power, lots of good delivery through the middle of the field as well. It will be an expansive sort of game,” Dave said.

He has no injury worries for Saturday and the squad has recently been bolstered by the return of inter-county star Ian Galvin, who was in the US for the summer. Cathal O’Connell will also be available for selection after serving his one-game ban for the straight red card he incurred against O’Callaghan’s Mills. These are major pluses for the side that defeated Éire Óg by six points without those key players.

It’s clear that Cuddy is very happy with the character shown by his side so far this season.

“A lot of people thought our lads wouldn’t be able to match the physicality of the Mills and they were. When the game boiled over a bit, they were still standing tall and they were well able for them. A lot of people also thought Éire Óg would cause us problems and even though we didn’t play that well, we got through it. We’re really looking forward to this next challenge now,” he concluded.

Cratloe has the highest proportion of dual players for a senior club but, this weekend, Alan Neville’s squad will have a one-track mind, as they prepare themselves for a tough quarter-final against Clonlara. Neville insists his side are as fit and fresh as they can be and it’s just as well, as they face into a very tough battle against a side that are in red hot form this year.

“Everybody wants to be in a quarter-final, it’s clear. With our situation, with all the dual players, we ideally would have liked to have won our two games and gone the direct route but it wasn’t to be. We’re delighted to be back in a quarter-final though. Even though we were six points down against Kilmaley, we were well in the game. We had five wides in that period, so we didn’t actually start that slowly. We got a goal at a crucial time just after half-time and that was a massive boost for us. We’re hoping, like everybody else, that we’re peaking at the right time of the season and that our form will carry through into the latter stages of the season,” he said.

Cratloe appeared to have the Canon Hamilton at their mercy last season only for the legs to give out as they relinquished a sizeable lead in the second half of the county final. There is a school of thought that something similar may happen this year as long as both codes are still in their respective championships. When it comes to this weekend’s clash, though, Neville has little fear of fitness being an issue.

“This is the first year in a while that we haven’t had a football game the week before a hurling quarter-final. Physically they are in a great position having done a lot of work with Trevor Slattery earlier in the season, so I have no complaints in the fitness department. I thought just coming up to the Kilmaley game that Diarmuid Ryan and Shane Gleeson would make it, but time just beat them. We’ve had them back for the last week or two now so they will definitely be available for this tie,” Alan confirmed.

Cratloe may have a feeling of unfinished business after last year’s near miss, and this clash is the perfect proving ground to put any doubts about them to bed.