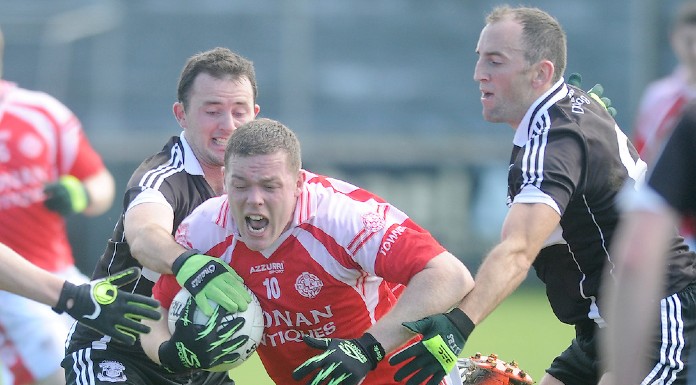 David Tubridy, Shane Daniels and Paraic Aherne will all be key figures this weekend.

Both these sides will come into this contest in a confident mood with both enjoying positive campaigns to date.

Eire Óg have been arguably the more impressive side as they announced themselves as one of the top contenders for the title with eye-catching wins over Cratloe and Clondegad to finish top of the Group of Death. It means they will carry good momentum and a lot of confidence into this quarter-final showdown where a different type of challenge awaits.

Doonbeg already have silverware on the sideboard after adding the Garry Cup title to their Senior B crown from 2018, and they will be hoping to continue that form this weekend. They were unlucky not to get something from their opening round defeat to Ennistymon as a strong closing quarter from the North Clare men saw them over the line. Two weeks ago saw them grind out a draw with their neighbours and rivals Cooraclare, with that result seeing them through to the last eight draw.

As has been the case all year, Doonbeg could see their squad stretched this weekend. Colm Dillon is a major doubt for the Magpies after he went off with a leg injury late in that game against Cooraclare, while Ronan Goode is unavailable as he serves a one match suspension after picking up a straight red card. It means Daniel Ryan and his management team will have to dig into the higher numbers but the loss of Dillon is a huge one for a game like this. His presence on the edge of the square in particular has reaped dividends throughout the season, and Doonbeg might just be lacking a focal point with that.

Eire Óg have been almost foot perfect in everything they have done with a real sense of clinical purpose in how they are putting games to bed. They have been dealt a major blow ahead of this game with county star and defensive rock Aaron Fitzgerald seeing his season come to an end after suffering a knee injury during their Clare senior hurling loss to Sixmilebridge. Along with Liam Corry, Fitzgerald had been providing solid cover at the back while the powerful running of Conal O’hAinifein and Ikem Ugweru is proving difficult for defences to handle. Up front they are spoilt for choice with Shane Daniels, Gavin Cooney and the player of the championship so far Eimhin Courtney doing real damage on the scoreboard. It is a balanced and composed Eire Óg outfit and with a cool head on the line in the shape of Paul Madden, they look to be mounting a real challenge this year.

The loss of Dillon and the greater scoring threat of the Eire Óg attacking options could well be the key factors here. Pound for pound, it would appear that the Townies front six will all likely get the better of their respective markers. Eoin Conway and Cian Mahony will be doing most to keep things tight but there will just be too many fires to put out.

Eire Óg manager Paul Madden is happy where his side are after two impressive victories over Cratloe and Clondegad, but he is under no illusions that Doonbeg will pose the sternest of tests this Sunday afternoon in Miltown Malbay.

“We did have two good wins in round one and two, but from our club’s perspective, it is no further forward that we have been in recent years. It is great to be in a quarter-final and we are looking forward to it, but there is a big challenge in front of us in the form of Doonbeg.

“We know plenty about them, we have played them plenty of times over the years and we know what is in store for us on Sunday. While we’re happy with our wins in the first two rounds, they’re in the rearview mirror now and we are looking forward,” Paul said.

Éire Óg have been a club impressing many around the county with their exploits in both codes, and despite a hard fought loss to favourites Sixmilebridge in the hurling this weekend, Paul is keen for his club’s good year to continue past this weekend.

“From my perspective, I wouldn’t want to be involved in any other club, it’s my club, but as a club we’re on the back of losing three of four hurling quarter-finals in a row and this is our third football quarter-final in a row. At some stage we have got to make that breakthrough to the next level. Hopefully, please god, if things go our way, that could be this weekend. Things are moving in the right direction as a club,” Paul believes.

If the Townies are to progress to the elusive semi-final stages, they will do so without their captain and Clare star back Aaron Fitzgerald who suffered a season-ending injury versus Sixmilebridge in the hurling quarter-final last weekend. This is a blow for his side, Paul admits.

“Aaron Fitzgerald, our captain and our inter-county centre back suffered a bad injury at the weekend and he is going to be out for a while and will be on the road to recovery for some time. It’s hugely unfortunate for Aaron, and for us.

“It gives someone else an opportunity to step up though and we have a panel of 30, so there are people there keen to make an impression, that haven’t featured yet. He’s a huge loss, there’s no question about it. He’d walk onto any team in the county and we’re disappointed for Aaron, personally, and ourselves too,” Paul stressed.

Paul admitted there are some tender bodies in the camp after a gruelling hurling encounter against the ‘Bridge but a place in the final four in the race for Jack Daly is sure to invigorate the Townies when they take on Doonbeg this weekend.

Doonbeg are in the rather unusual place of being in a senior championship quarter-final without winning a game, but if they can correct this eccentric statistic when they take on the in-form Éire Óg this weekend, they certainly won’t mind.

Manager Daniel Ryan stressed that while it will be a tough task to take down the Townies, his side have performed better than the results show so far.

“If you were looking for two teams that are in form coming into the quarter-finals it would have to be Miltown and Éire Óg because all the talk is about Éire Óg and they have an abundance of talent coming through. We will be up against it, but we will definitely be ready this weekend.

“Going back to the Ennistymon game, we were very disappointed after that match. We felt we were going very well going into that game and, to tell you the truth, if we had taken our chances, we probably would’ve scraped a win from that game.

“The Cooraclare game was always going to be a very tough fixture, being a local derby, they have always been tough fixtures, down through the years,” Daniel said.

The influx of new faces, and the progression of young talent is something Doonbeg appear to be focusing on this year, but this has been hindered by injury.

“Well we have lost Ronan Lillis and Cian Clancy to cruciate ligament injuries this year which is very unfortunate. They are two very promising young lads. Overall, our age profile has come down in the last few years, but as every club in West Clare knows, they numbers aren’t really there due to a lack of employment opportunities.

“We have a lot of young lads playing now. We wouldn’t have a massive conveyor belt coming through, we don’t have a massive pick but when young lads do come through we try to develop them and give them as much game time as we can, but we don’t want to throw them into the deep end either,” Daniel pointed out.

The one facet of the game the Doonbeg manager is looking to see marked improvement on against Éire Óg is starting the game quicker.

“We got to shaky starts in our last two games; we went six points down to Ennistymon and seven points down to Cooraclare. If we can settle into the game faster, the longer we stay in the game, the more of a threat we will be. We will have to be on our toes all over the field though, as we are taking on a quality team,” Daniel finished.