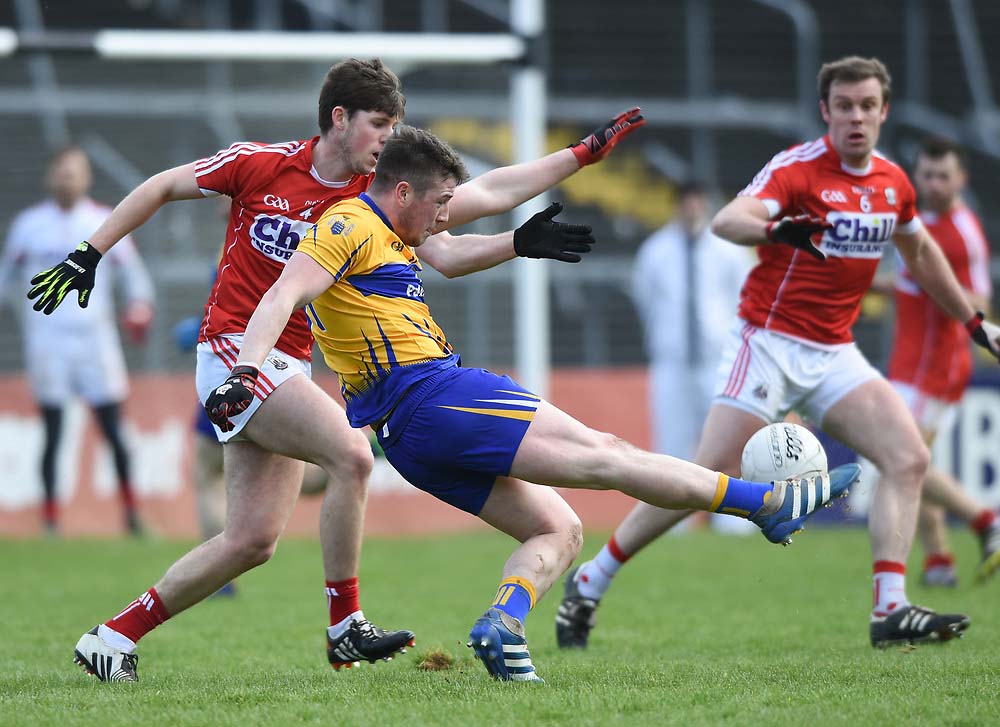 Keelan Sexton of Clare in action against Kevin Crowley of Cork during their National Football League game at Cusack Park. Photograph by John Kelly.

Clare and Cork go head to head in round three of the National Football League Division Two in Cusack Park this Sunday at 2pm.

Both sides come into the game having picked up one point from their opening two games, with the Rebels drawing against Fermanagh in Enniskillen before losing out to Kildare in Pairc ui Chaiomh.

Kilmurry Ibrickane’s Keelan Sexton will be central once more to the Clare challenge as they look to build on last weekend’s draw against Armagh, but he says being without his club-mate Dermot Coughlan is a huge blow.

“You hate seeing injuries like that happen and it is such a pity that it had to happen to him. He’s just after coming in to the panel and it’s only his second league game. He’s an outstanding player and it was awful to see it happen. I know Dermot very well and I have no doubt that once he gets on the mend, he will be back as strong as ever. He’s a phenomenal player and a great young lad and we all hope that he recovers as quick as he can” he said.

Clare come into Sunday’s game off the back of a dramatic late draw against Armagh, but Sexton says the squad will feel it was a point dropped rather than one gained.

“I know we were three points down going into injury-time, but we were the same against them last year and they got the result. We wouldn’t be happy with what happened in the second half because we had a good foothold at half-time but dried up after the break. It was great to get something out of it though. When it comes to the league, it’s all about picking up points where you can and it’s one on the board for us now. If someone had offered us that heading into injury time, you would have taken their hand off for it” said Keelan.

With the Rebels due to visit Cusack Park on Sunday, it represents another great opportunity for the Banner to put more points on the board. They’ve beaten Cork in their two most recent league meetings, and also got the better of them in the McGrath Cup final earlier this year. There will be a reshuffle required by management, with Cathal O’Connor also set to miss out after being red carded during the second half of the clash with Armagh. Clare will be hoping there may be good news on the fitness of Sean O’Donoghue this week, which could see the Cooraclare man come in to partner Gary Brennan at midfield, while Pearse Lillis, Gavin Cooney and Cormac Murray are among those who be vying for a place in the forward division.

Sexton is confident Clare now have a panel of players who can all step up when required.

“It’s always unfortunate when you get injuries and cards like that, but I have no doubt that whoever comes in to fill those jerseys can bring it to another level again. That’s something we have to do. You can’t go around feeling sorry for yourself and licking your wounds. We just have to park what happened and drive on again. What we need now is a bit of backing from our home support and hopefully we can get the crowd in there to do that. We will be looking to put in another strong performance and if we do that and get the points, then we are right there in the mix. That’s what we need to do, focus now on Cork and make sure we are ready to meet them head on” he concluded. 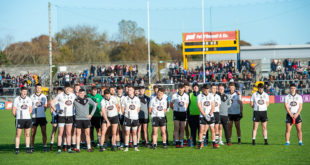