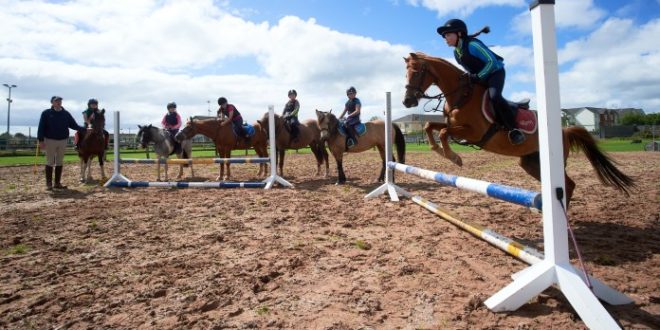 Clare Pony Club will celebrate 40 years in existence in 2021, with the numbers involved with the club currently experience a steady rise.

The club was first established in 1981, with its members coming from all across the county to the club’s base at the Showgrounds in Ennis.

Lessons are held every Friday night from September to April, where members bring their own ponies and take part in lessons given by highly qualified instructors, all of whom were Pony Club members themselves. Club chairman Nikki Harvey outlined that the ethos of the organisation is on ensuring everyone can have access to what is on offer.

“We really promote an atmosphere of inclusivity and make sure that anyone who has an interest in equine sports gets that chance to be involved. The club offers so much more in terms of further opportunities with many of our members using their time with us as a platform to build their future careers on. We have had members who go on to qualify as vets while others get involved in careers like farriery. It is an outlet which can open up so many doors” she outlined.

The annual club camp was held in recent weeks with almost 40 members ranging from eight years old to 16 years old taking part. Some were first time participants where others were coming back after great experiences in previous years. Children brought their own ponies and get that hands-on experience on how to look after them along with tacking and caring for their needs. They get the opportunity to ride twice a day, and the week is filled with dressage, show jumping, cross country fences, mounted games, stable managements and non-mounted games along with talks and a visit from the Clare Hunt hounds. By the end of the week many of the members will take a standardised exams or achievement exercises.

Part of the programme of events is also the option of learning how to swim both casually and on a competitive level. Lessons are held on Monday evenings at Ennis Swimming Pool, which prepares members to take part in the Minimus competitions. This comprises of running, swimming and cross country with ponies for U-12’s. Members over 12 compete in Tetrathlon which also includes shooting.

During the summer months some members will go to compete in the Irish Pony Club Championships for Hunting Trials, One Day Eventing, Minimus  or Tetrathlon, Dressage, Combined Training, Musical Ride and Show Jumping. This usually entails weekends away camping with the club. For a small club, Clare punch well above their weight when competing at these championships. One of the highlights of 2019 was the Musical Ride where Clare won the Irish Pony Club Musical Ride Champions in Wexford along with the opportunity to perform at the Dublin Horse Show in August and Curragh Racecourse in September.

As a club the main focus is to provide a safe and cheerful environment where members can learn to how to ride, but also to care for and train their ponies whilst making lifelong friends and memories to cherish. Parents also enjoy the connections made over the many days and nights spent together, aiding their children and the club as a whole. Many past members have developed careers in the Equestrian world including Groom for international riders, Huntsman, Veterinary Surgeons and Farriers.  Some have represented Clare and The Irish Pony Club internationally. There are no restrictions of the ponies, they can be any height, any type, any colour. It gives children from Clare the opportunity to meet other children from all over the county with similar love of horses and all equestrian sport. The club is are always open to new members, from Clare, up until the age of 23.