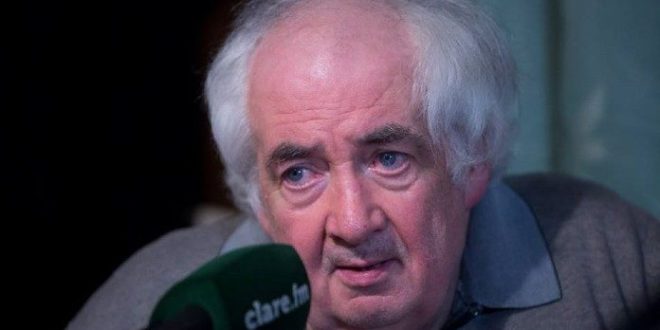 BROADCASTING and music circles in Clare, and well beyond, are in mourning after the death was announced of Clare FM presenter, Pat Costello.

A long-time Shannon resident, he was a native of Moycarkey in County Tipperary. Mr Costello was a member, for many years, of the acclaimed traditional group Shaskeen, playing banjo, bouzouki and guitar. He was also an expert music producer and sound-recording enthusiast. For more than two decades, he presented music shows on Clare FM, most recently the hugely popular ‘Gentle Folk’ on Sunday nights.

Managing Director of the station, Liam O’Shea, who was a long-time friend as well as a colleague, described Mr Costello as a genius.

“Pat, to me, was one of the most talented people I’ve ever known,” he said. “He was a genius. He was absolutely brilliant when it came to technology. Pat was a fantastic musician. He spent a lot of time with me when I worked in the RTÉ studios, late into the night recording and working on tunes. He was my confidant, my greatest critic, my mentor.”

“His programmes were always beautifully thought-out and structured,” she said. “It was never just a matter of playing discs for the sake of filling a show. He felt everything very deeply. He was a highly committed music presenter and a very emotional man. The people in music mattered at least as much to him as the music itself.”

Fiona McGarry joined The Clare Champion as a reporter after a four-year stint as producer of Morning Focus on Clare FM. Prior to that she worked for various radio, print and online titles, including Newstalk, Maximum Media and The Tuam Herald. Fiona’s media career began in her native Mayo when she joined Midwest Radio. She is the maker of a number of radio documentaries, funded by the Broadcasting Authority of Ireland (BAI). She has also availed of the Simon Cumbers Media Fund to report on development issues supported by Irish Aid in Haiti. She won a Justice Media Award for a short radio series on the work of Bedford Row Project, which supports prisoners and families in the Mid-West. Fiona also teaches on the Journalism programmes at NUI Galway. If you have a story and would like to get in touch with Fiona you can email her at fmcgarry@clarechampion.ie or telephone 065 6864146.
Previous ‘Unbelievable Response’ To Ennis Hotel’s Thank You To Health Workers On The Frontline
Next Vital Medical Equipment Arrives On Shannon Plane