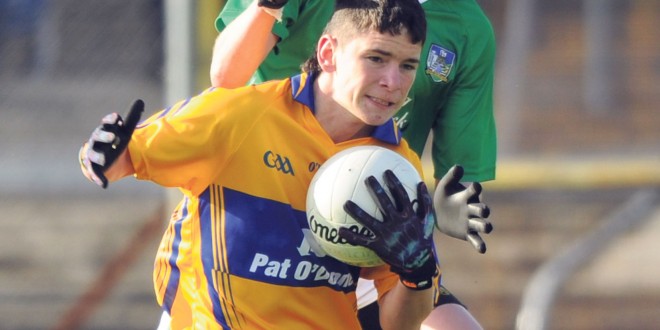 Kilfenora’s Cian O’Dea had a good performance for Clare on Wednesday.

A KERRY team that followers of the game in the Kingdom believe will have a big say in the destination of the All-Ireland title, proved too strong for their Banner opponents in the opening round of the Munster Minor Football Championship at Cusack Park on Wednesday.

While the home side did create three excellent goal opportunities, they were outplayed in many sectors. In the losers round, Clare travel to play Limerick on Thursday next, who lost to Cork on Wednesday.

There was surprise when the Clare side was named on Monday regarding the positioning of some players. On their path to winning the Minor A Championship last year, Brian Cahill, the team captain, played either at midfield or centre-back for Lissycasey. On Wednesday he lined out at corner-back, a position he filled until he was black carded, a somewhat harsh ruling by the referee, after 20 minutes.

Kerry dominated the aerial battle at midfield and it could be argued that Kerry laid the foundations for victory in this department. For the second half, Clare moved James Woods from corner-back, a position he has rarely played in, to midfield.
Kerry suffered an early blow after just two minutes, as the highly rated corner-forward Cathal Bambury suffered a suspected cruciate injury.

The early signs were promising for Clare, as they led twice inside the first 11 minutes. Keelan Sexton kicked a 47m free in the sixth minute for the first score but Kerry replied with like scores from Jordan Kiely and Killian Spillane before Sexton landed another 46m free to level the game after 10 minutes.

A minute later, Conal У hAinifйin won possession in his own half-back line and set off on a solo run that ended with his effort for a goal rebounding off the bottom of the upright, the Kerry defence well beaten. The rebound was first-timed over the bar by Aidan Davidson and Kerry were fortunate not to have been picking the ball out of the net.

From here on, the visitors took a grip on proceedings and they went on to hit six unanswered points to lead 0-8 to 0-3, at the half-way point.
In the great Kerry team of the late ’70s and ’80s, three Spillane brothers were key members. Killian Spillane, son of the youngest of those three brothers, Tom, tormented Clare on Wednesday. Playing at full-forward, he created huge openings in the home side’s backline and he finished with a tally of 1-6, as well as having a hand in a number of other scores.

The sides exchanges points in the opening minutes of the second half but then Kerry hit 1-2 without reply, the goal coming from Spillane, to open a a 10-point lead, 1-11 to 0-4.

They struck for their second goal, from the impressive Jordan Kiely, 11 minutes from time and the only question to be answered after this concerned the size of the winning margin.

Clare battled to the end but Kerry’s midfield dominance allied to their slick movement off-the-ball proved too much. That said, they are sure to be concerned that Clare did create four great goal chances and the winner’s captain, Shane Ryan, had to make two good saves in the second half.
Cian O’Dea, Conal У hAinifйin, Colm Pyne and Keelan Sexton played their hearts out for Clare.