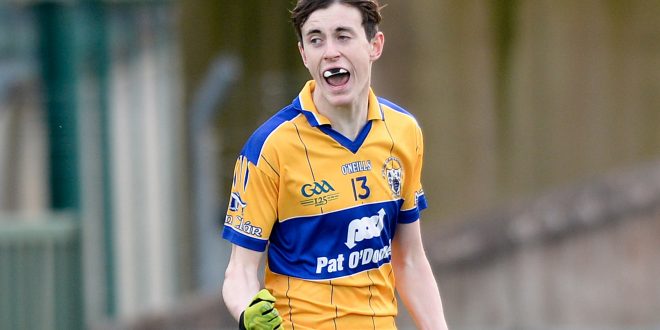 ALTHOUGH not lacking effort or desire, the Clare minor footballers were comfortably beaten by two-in-a-row All-Ireland champions Kerry in Wednesday’s Munster semi-final, which was played in perfect conditions in Miltown Malbay.

An attendance of 808 people saw Clare give it a decent shot against their opponents from across the estuary but, ultimately, Kerry were too slick and found it easier to create and take scores across the hour.

Kerry led 1-7 to 1-3 at half-time and, at one stage, the reigning Munster and All-Ireland champions were six points up. They led 1-5 to 0-1 after 16 minutes, largely thanks to a soft fourth-minute goal from corner-forward Brian Friel. The Rathmore clubman picked up a break from a David Clifford shot, which was spilled by Clare goalkeeper Mark Lillis.

Ferdia O’Brien had already pointed from play for the Peter Keane-managed Kingdom and shortly after their goal, Clifford added a point from a free.

It wasn’t looking great for Clare at that stage, although they had a clear and coherent game plan. They employed nominal corner-forward Tadhg Connellan as a sweeper, while most of the forwards, with the exception of Dermot Coughlan and Joe McGann, spent much of the game in defensive positions.

Ciaran O’Donoghue put over Clare’s opening point in the eighth minute, when Coughlan and McGann combined to create the opportunity for the Cooraclare man. Kerry responded with three points from Seán O’Shea, Mark Ryan and David Clifford to establish a seven-point lead.

Even at that early juncture, it seemed that Kerry would inevitably win. However, Clare enjoyed a very productive six-minute spell when they hit their opponents for 1-2 without reply. St Breckan’s midfielder Pádraig Kelly pointed a free in the 20th minute and following five scoreless minutes, the Clare supporters in Hennessy Memorial Park were lifted when Joe McGann showed exceptional calmness to put away a goal. Dermot Coughlan had a point attempt half blocked down and the deflection deceived Kerry full-back Niall Collins. McGann stole in behind him, soloed across the Kerry square and put away a badly-needed goal.

A minute later McGann’s clubmate, Rowan Danaher, was fouled and Kelly pointed the free. At that stage Kerry were just 1-5 to 1-3 ahead and it seemed that Clare were about to make a serious fight of it.

Kerry however kicked two critical scores just before half-time, David Clifford and Séan O’Shea kicking another score apiece from play.
A four-point deficit was not insurmountable for Clare but they needed to start the second half by really going at Kerry and making that count on the scoreboard. Instead it was Kerry, who had made two half-time substitutions, who visibly upped their game.

David Shaw and Clifford put over a point each to stretch their lead to six points, 1-9 to 1-3, six minutes in.

Two minutes later McGann was somewhat unlucky not to create a goalscoring opportunity when he soloed in by the end line at the town end but was robbed of possession just as he was about to either lay it off or shoot.

Kelly put over a free in the ninth minute but Clare didn’t score again until the same player repeated that feat four minutes from time. His midfield partner, Darragh Bohannon, added a point from play and that was the extent of Clare’s scoring return in the second half.

Their forwards worked hard but most of their best efforts were in their opponents’ half, as Clare flooded their defences with numbers and attempted to break out at pace when they won back possession.

Kerry didn’t play particularly brilliantly in that second period but further points from Mike Breen, O’Shea and Shaw ensured that they were always in near total control. Clare needed at least a second goal to make a real game of it and they didn’t managed to create any clear-cut opportunity during the second half hour of football.

Clare’s defensive tactics ensured they stayed in the game for a reasonable period and it is almost certain that they would not have meaningfully competed with Kerry had they not adopted this approach. However, their problem was that Joe McGann was too isolated when the ball reached him and he was double-marked by Niall Collins and Michael Potts. It’s an indication of how much class McGann has that he still got on plenty of ball throughout the hour but didn’t have the numbers flooding in support at the right time.

Although black-carded late in the game, Dermot Coughlan also showed his ability, especially in the first half. Elsewhere Padraig Kelly, Rowan Danaher and Peter Collins, who was sent off on a double yellow card in injury time, gave it everything for the Kieran Kelleher-managed side.

Kerry will now play either Cork or Limerick in the Munster minor football final on July 3.