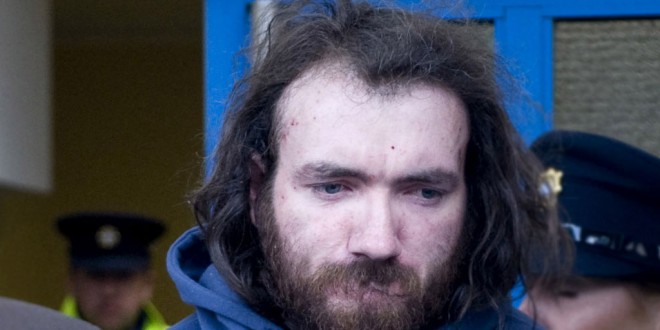 Joe Heffernan who is appealing his murder conviction, pictured \t Ennis Court in 2011.

A BAREFIELD man jailed for life for the murder of a young man over three years ago has moved to appeal his conviction, claiming the prosecution ought to have proved that he did not have diminished responsibility at the time.

He was found guilty by a jury at the Central Criminal Court and was given the mandatory life sentence by Mr Justice Patrick McCarthy on July 3, 2013.

During the trial two 999 calls were played to the jury, who were also given transcripts of the calls.

“Hello. This is Joe Heffernan. I’m after killing a man,” the caller told Garda Claire O’Shaughnessy, who identified her voice on the first recording.

“He came onto me and I killed him. I’m not gay or nothing you know,” he said.
“I’m going to kill myself. I’m not going to prison,” he added. The caller said he did not mean to kill anyone.

Moving an appeal against conviction today (Wednesday), counsel for Heffernan, Padraig Dwyer SC, submitted that the onus of proof ought to have been on the prosecution to prove beyond a reasonable doubt that Heffernan was not suffering from a mental disorder and had diminished responsibility at the time.

Counsel submitted that the same rules which apply to the concepts of provocation, self defence and intoxication applied to diminished responsibility.

According to the statute, the defence must establish an accused is not liable to be convicted of the offence by reason of diminished responsibility.

Mr Dwyer said the defence only had to get a direction from the trial judge that mental issues were present in the case or were there for consideration.

Having done that, it was for the prosecution to prove beyond a reasonable doubt that the accused was not suffering from a mental disorder, he submitted.

“It all depends on what you mean by (the word) establish,” President of the Court of Appeal Mr Justice Ryan remarked.

What if the Oireachtas mistakenly created a situation where the onus is on the accused, Mr Dwyer said.

Counsel for the Director of Public Prosecutions, Bernard Condon SC, said there was no ambiguity in the statute.

Mr Condon said each section of the statute had to be viewed in the context of the whole Act. It was clear, he said, the burden was on the defence.

There wasn’t any doubt about that other than to create some sort of magic around the word establish, he said.

President of the Court of Appeal Mr Justice Seán Ryan, who sat with Mr Justice Garrett Sheehan and Mr Justice John Edwards, said the court would reserve its decision.