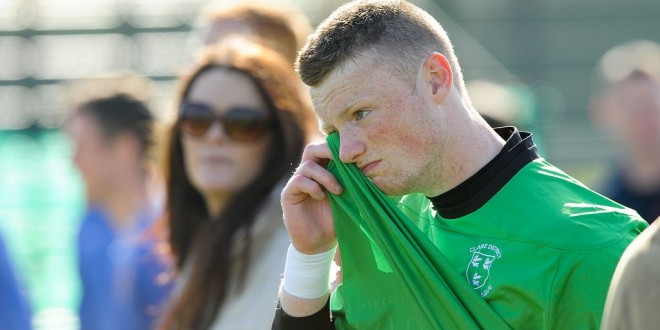 ALTHOUGH the Clare League held a man advantage for almost an hour of Sunday’s Oscar Traynor final in Dublin, two second half goals won it for the home team.

AUL’s Stewart Glynn was red carded in the 32nd minute of the first half following a tackle on Clare’s Alan Kelly. The game was goalless at that stage and remained so at half time. Clare goalkeeper John Mulready made several excellent first half saves and also did well in the second half.

He was though rather unluckily caught out for AUL’s first goal, which was netted by right back Damien Cuffe seven minutes into the second period. The defender appeared to be trying to cross the ball but somehow the ball spun over a wrong footed Mulready and into the Clare net.

The 10 men of the AUL were buoyed by this and played some good stuff thereafter. They sealed the result nine minutes from time when left back Mark Mooney goaled from a yard after excellent work by Dean Carpenter.

What will disappoint Clare most is the fact that they didn’t play to their capability. The fluency of their play, evident in previous rounds, was not on show in north Dublin.

On an afternoon when most of the Clare players didn’t perform, John Mulready excelled in goals, while Eoin O’Brien was composed at centre-half and tried to use the ball intelligently.

Eoin Hayes looked dangerous in the opening half but wasn’t as involved as Clare needed thereafter.

West Clare native Peter O'Connell has worked for The Clare Champion for 12 years and covers everything from sport, especially GAA, news, features and has been even known to branch into the fashion scene on occasion.
@@westclarepage
Previous The cost of not neutering
Next Woman dies in North Clare house fire