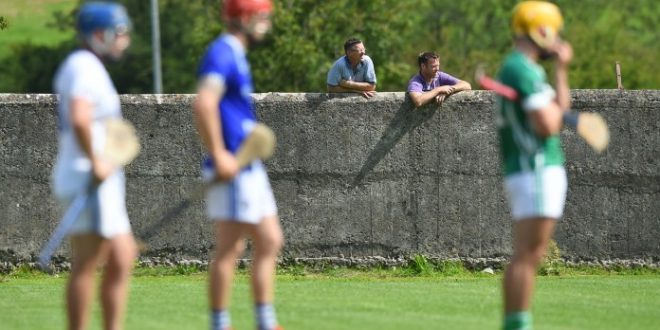 Vantage points were at a premium for the clash of Scariff v Parteen in Tulla on Sunday. Pic by John Kelly

ST JOSEPH’S Doora-Barefield saw off Newmarket-on-Fergus to book their spot in the last eight of the intermediate championship with a bit to spare in Sixmilebridge on Saturday afternoon.

David Conroy landed 0-9 in a stellar display at midfield while a late Tom Hannan goal was the deciding score of the game.

The score line would have been much more favourable to St Joseph’s were it not for the excellent goalkeeping of Paudie Guilfoyle, who pulled off three excellent saves to keep his team competitive until the final quarter.

The Parish started much the better with Davy Conroy, Jack Hannan, Conor Tierney and Cian Barron all slotting over points and seeing them lead 0-5 to 0-1 after ten minutes.

Newmarket then came to life and a Niall Enright goal saw them draw level. Three Davy Conroy points and one from Cian Barron saw St Joseph’s back into the lead while Darren Duggan and Peter Power were on target to ensure the Parish held a narrow 0-9 to 1-5 lead at the break.

Niall Enright and Peter power were on target for the Blues while David Conroy slotted four points on the bounce for the Parish in a competitive affair.

With 64 minutes on the clock, the defining score of the game arrived when Tom Hannan goaled for Doora-Barefield and Cathal Ruane and Alan O’Neill finished the scoring off with points to eventually see off a gallant Newmarket challenge and guide last year’s beaten finalists through to the final eight.

Scariff announced themselves as championship contenders with an impressive display to book their spot in the last eight of the Clare intermediate hurling championship.

Young star Mark Rodgers was the standout player as he accounted for 2-9 of their tally with both goals coming in the opening quarter. The first was a penalty which he clinically dispatched while the second was all of his own making as he won the aerial tussle before firing home.

By the opening water break the East Clare led 3-5 to 0-3 having made a blistering start to the game in a sundrenched Dr Daly Park. Conor Hayes fired their third goal just moments after Rodgers had found the net and with three quarters of the contest left, the result was looking inevitable. The lead at the break was 15 points with Scariff 3-11 to 0-5 in front and looking well in control.

Parteen did fight back in the third quarter with Evan Fitzgerald’s goal seeing them outscore Scariff 1-4 to 0-2 in that period but it was never in doubt as to who would come through. Scariff fired eight of the last nine scores of the game to make sure of the win and move on to the quarter-finals.

The weather was scorching last weekend but it was raining goals in Bodyke with eight of them shared between the East Clare rivals.

Tulla’s bid to bounce straight back up to the top tier continued with another fine display, none moreso than Niall Bolton who finished the evening with a personal tally of 4-6.

His hat-trick was wrapped up inside the opening 12 minutes, with Tulla blitzing through the Killanena defence to lead 5-8 to 1-6 at the break. Conor Murphy and Colm McInerney were helping out Bolton in the goalscoring effort, but he continued his crusade with a fourth goal early in the second period.

Tulla’s greater experience was a telling factor in the contest as they dominated in every line and while Killanena battled hard, they had to give best to a superior outfit as Ray McInerney’s charges moved on to the last eight.

On a weekend where the intermediate championship saw some high scoring games, this one did not disappoint as Bodyke eased into the last eight draw.

Mark Rodgers lit up Dr Daly Park in the first of a double header, but it was Patrick Fitzgerald who stole the show here as he blitzed the Clarecastle defence for a personal tally of 3-10 in an brilliant display.

He got the hat-trick wrapped up early with his trio of goals all coming inside the opening 20 minutes, while Clarecastle’s task was made all the more difficult after being reduced to 14 men in that same period.

The game was effectively over as a contest by the half-time break with Bodyke 4-11 to 0-7 clear. Liam O’Donnell also found the net early in the contest to add to Fitzgerald’s trio.

The East Clare men continued to keep the scoreboard ticking over in the second period but it was a mere formality and while Clarecastle did find the net late on, it was mere optics in the context of the overall result.

Tubber survived a late scare to progress to the last eight of the intermediate championship defeating a gallant second string from Inagh-Kilnamona.

The North Clare men held a 0-17 to 1-9 lead at the final water break but a late flurry of 1-3 from the Combo meant the 2017 beaten finalists clung on with just the minimum to spare.

They got off to the better start, leading 0-5 to 0-3 at the first water break with Blaine Earley doing most of their scoring. Their marksman finished with a healthy haul of 0-12.

Ronan Monahan also put in a great showing for Tubber, landing 0-3 from play.

Barry Keating was chief scorer for the Combo as he landed 0-10, all from placed balls, while Jamesy McConigley and Brian Foudy found the back of the Tubber net.

The game was nip and tuck for the entire first half and Tubber took just a one-point lead into the break with the scoreboard reading 0-10 to 0-9.

Tubber found an extra gear in the second half with scores from Ronan Monahan, Earley and Fergal and Lorcán O’Grady and threatened to pull away from their rivals. Inagh-Kilnamona bagged just one score in the third quarter and it came via a Jamesy McConigley goal to keep the Combo somewhat in touch.

As the game drew to a close, Inagh-Kilnamona found badly needed points from Keating, as well as a Brian Foudy goal to ensure it was a very nervy finish for all involved.

Tubber toughed it out and ensured they would progress to the quarter-finals, and will be sure to use the scare as a lesson going forward.

Sixmilebridge’s second string moved back into the last eight of the Clare intermediate hurling championship with a comfortable win over neighbours Clonlara.

An early goal from Ciaran Hassett set the ‘Bridge on their way to a 1-10 to 0-4 half-time lead and left last year’s Junior A champions with a mountain to climb.

Sean Lynch top scored for Sixmilebridge with a personal tally of 0-7 while seven different scorers contributed on the evening.

A consolation goal in injury time provided little solace for Clonlara as Sixmilebridge marched on.

Smith O’Briens advanced to the last eight of the intermediate championship after a 13-point Tommy Reddan haul saw them with six points to spare over Ruan on Sunday evening in Shannon.

The Killaloe free-taker has amassed 1-24 in two championship games thus far and his influence on the scoreboard was the deciding factor in this tie.

Smith O’Briens couldn’t shake off the resilient Ruan until the final quarter, when they landed five of the last six scores to finally put the tie to bed.

Shane Punch was in flying form for Ruan, as the forward landed 0-4 from play and two early punch points helped keep Ruan in touch early on, as they trailed 0-5 to 0-3 at the water break.

Aidan Lynch was his reliable self as the marksman landed 0-8, all from placed balls, and this helped Ruan narrow the gap to just one point at half-time.

Other than Reddan’s huge haul, Smith O’Briens had six other scorers throughout the clash, with Mikey O’Shea, David Gough and Keith Stritch landing 0-2 each, while Evan Connelly, Marc O’Halloran and Pat Aherne were also all on the mark with a point each.

Once the second half resumed, the Killaloe side stretched their 0-11 to 0-10 lead as their dominance eventually began to show, and the 0-17 to 0-13 lead they took into the final quarter of the game grew larger.

Pat Aherne and Reddan were among the late scorers for Smith O’Briens while Ruan’s last five scores all came from Aidan Lynch frees but Smith O’Briens deservedly booked their final eight spot with a bit to spare.