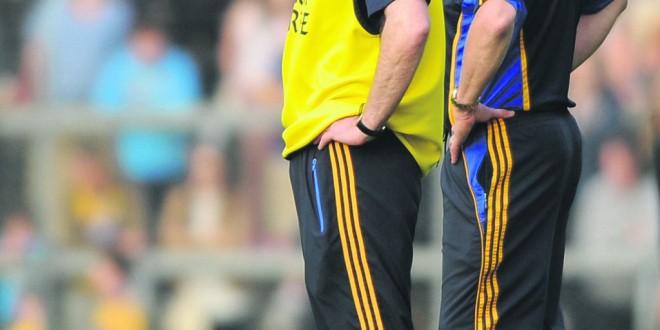 Clare joint managers Gerry O Connor and Donal Moloney on the sideline during their Munster U-21 semi final against Tipperary in Cusack Park. Photograph by John Kelly.

THE U-21 hurlers and management team are an ambitious bunch, according to joint team manager Gerry O’Connor.

“We are very ambitious and we set ourselves ambitious goals at the start of the season. Number one was to win the first game in the Munster championship, get to the final and win that, get to an All-Ireland final and try and win that. That’s why we are here on a Sunday evening, getting everybody back in to assess their injuries and get a recovery programme in place. The management team met over the weekend to plan how to put a performance together that will beat Wexford,” he said at last week’s press evening.

Clare have analysed the Wexford and Galway semi-final to death, O’Connor points out.

“We have also watched the Dublin v Wexford U-21 Leinster final. Wexford have strengths and weaknesses. They have two very obvious strengths, they have conceded very little goals and the one against Galway was the first in the whole of the campaign, through four games, against Kilkenny, Offaly, Dublin and Galway. They don’t concede goals and they have a very real goal threat in their full-forward line in Clarke, Nolan and McDonald. Their full-forward line is as impressive as we have faced all season.”

O’Connor doesn’t expect the senior games between the counties to have any impact on Saturday.

It will have no bearing whatsoever. There are 15 to 20 different players and it’s a different situation, a different competition. Look at their semi-final with Galway, one would have said ‘they are gone now, Galway will take over here’, they went four points up. Several times in that game, you would have said Wexford were gone and we expected Galway to win it to be perfectly honest but Wexford showed tremendous heart and spirit. There was a real never-say-die spirit evident and that was also the case in the game here against Wexford and down in Wexford Park and we were at both.

“Those games will have no great bearing other than to swell the support. Wexford hurling has had a great season. They will be disappointed with the way the senior finished against Limerick. They will bring 20,000 supporters to Thurles on Saturday and if there is one thing we can appeal for, it is support. We will need as much support and more, if that’s possible. We had huge support against Antrim last year. Their support was very obvious from the games against Limerick, Waterford and Clare. They are hungry for success.”

He added that “this is, in many ways, a very unusual pairing to have Clare and Wexford in the U-21 final when we look at the heavyweights of the game that have been there for the past number of years. If you were to sit down two or three years ago, you would be expecting Kilkenny, Tipperary and Galway to be contesting U-21 finals for the foreseeable future”.

Is it a disadvantage that Clare have had such an easy passage to the final?

“It is and it isn’t. At the start of the year, all these fellas wanted was to get a chance to play in and win an All-Ireland final. Now they are getting the opportunity. We feel we are the best U-21 team in Ireland and we are getting an opportunity to prove that and that’s the way these guys are looking at it. They feel that if we perform to the ability that we can perform to, we will win.”

Asked about their plans for the future, the Éire Óg clubman replied “We take everything one step at a time and right now, we are preparing for an All-Ireland final”.