Home » Sports » Clare had no answer to Waterford’s sharpness 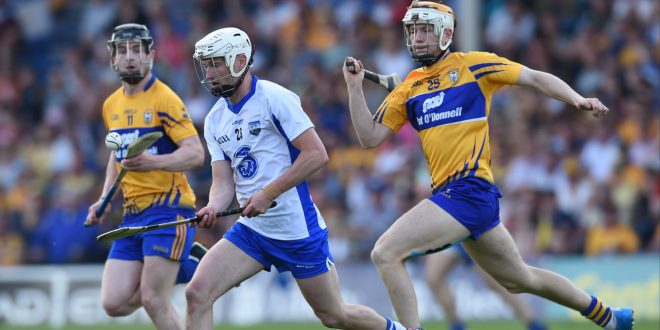 Brian O Halloran of Waterford in action against Aaron Cunningham of Clare during their Munster senior Hurling Championship Semi-Final at Thurles. Photograph by John Kelly.

Clare had no answer to Waterford’s sharpness

Having travelled to Thurles with high hopes that they would repeat their recent league final win over Waterford and qualify for a Munster final date against Tipperary or Limerick on July 10, Clare fans in the official attendance of 19,715 returned in disappointment on Sunday evening after seeing their charges comprehensively beaten by Waterford.

From an early stage it was evident that Clare were struggling in many areas and while they drew level with their opponents on a few occasions in the opening hald and could have taken the lead but for some poor shooting, there is no denying the merit of Waterford’s victory

Both sides made changes from the teams which started the league final replay.Clare had John Conlon and Oisin O’Brien back from injury and they replaced Jack Browne and Aaron Cunningham while Waterford included Maurice Shanahan and Pauric Mahony in place of Jake Dillon and Colin Dunford.

The Waterford changes played a key role in their victory as, between them, the accounted for 1-8 of their team’s total

This game started much like the league final replay with Waterford racing into the lead, an Austin Gleeson point being followed by a Maurice Shanahan goal, a score that the Clare defence won’t have been happy to have conceded.

For the next ten minutes Clare had the better of matters and points from Conor McGrath (2), Conor Cleary and Colm Galvin brought them level before Kevin Moran and Podge Collins exchanged points to leave the sides tied at the end of the first quarter.

Clare had chances to go in front but they hit a number of bad wides. With just three minutes to go to half time just the minimum separated the sides but the Decies outfit finished the half strongly with three unanswered points to lead at the break, 1-9 to 0-8.

For most of the first half Waterford succeeded in curbing the threat of Tony Kelly, Colm Galvin, John Conlon and Conor McGrath who was guilty of a number of Clare wides.

Clare needed a good start to the second half but the winners hit the first three points to open a seven point lead and from here on Clare were fighting an uphill battle.

In an effort to get back into contention they introduced Colin Ryan, David McInerney and Aaron Cunningham but the Decies outfit remained in control on a day when Clare’s best players were Conor Cleary, Brendan Bugler and David Reidy .

In the opening game, the Munster intermediate championship semi-final, Clare defeated Waterford on a scoreline of 3-20 to 2-12.