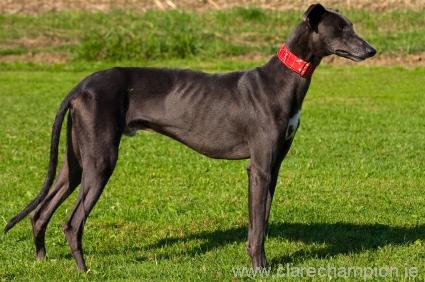 THE local qualifiers may not be as numerous as other years but there is nonetheless a strong challenge for honours at the 93rd National Coursing Meeting in Clonmel on Saturday, Sunday and Monday next. Clare has two representatives in the BoyleSports Derby and a total of six interests in the Horse and Jockey Oaks.

With a reduced team, trainer Pat Curtin has high hopes with the Kilcreevin-Ballymoate qualifier Roquefort Teddy in the Derby and Mad Decision in the Horse and Jockey Oaks. Owned by the Windfarm Syndicate of Michael Eustace (Ennis) and County Galway men Jonathan Newell and Gerry Hughes, Roquefort Teddy is one of three big names bred by Sharon Sexton of Mullagh.

In the draw at the Horse and Jockey Hotel near Thurles on Friday night, he was not particularly  lucky as he came out of the hat with a tricky first round opponent in the 10/1 shot Silent Whisper, the Galway-Oranmore qualifier.

Clareabbey Flyer (33/1), winner of the Miltown Miltown stake for trainer Tom Flanagan and the Halfway Bar Syndicate, Ennis was the first name out of the hat in the third quarter. He clashes with another 33/1 chance, Ashmore Derby, the County Carlow qualifier, since acquired by John Boyle [Derby sponsor].

Outoftheshadow, the Cashel qualifier from the same litter as Roquefort Teddy and Mad Decision, is the 6/1 favourite and is drawn in the first quarter against the Loughrea winner Oakview Wave.

Mad Decision, again trained by Pat Curtin for the Windfarm Syndicate, has a buckle in the first quarter of the Horse and Jockey Oaks against Bridewell Kit (25/1), the Ballyduff qualifier. Backed from 23/1 to 10/1, Mad Decision won her trial stake in Edenderry for Sharon Sexton.

In the same quarter is Shes Our Diva (33/1), winner of the Glanworth qualifier for Gerry Cooney, Shannon, who is secretary of the Tradaree Coursing Club. Her first round opponent is Could be Queen (25/1), who earned her ticket from Rathkeale.

Also competing in the first quarter will be Ballymore Lucy, winner of the County Carlow qualifier for Cooraclare natives  Liam and Doris Liddy, when known as Heres Lucy.Now owned in Ballymore Eustace by Dubin Coach man, John O’Sullivan from Labasheeda and his Clare-born wife, the former Una Garrahy, Ballymore Lucy (25/1) goes to slips with Borrisoleigh winner, Killimor Belle (40/1).

Kilmihil leads the challenge in Clonmel