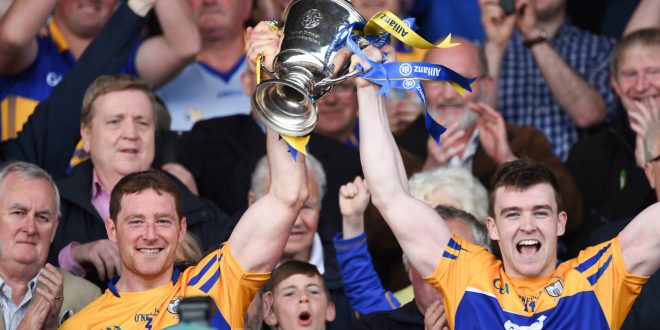 Contesting the final of the National Hurling League, which required a replay, netted Clare GAA €202,552.51.

Clare’s return from the National Football League, where they were crowned Division 3 champions, was worth €28,554.38 to the board.

Details of the financial returns from both leagues were revealed by treasurer, Bernard Keane to Tuesday night’s board meeting in Caherlohan.

The treasurer stressed that these figures “are what has been paid out in cheques up to the end of August and may not be a true figure but it gives you a feel for where we are. It’s not a complete picture.”

Whitegate delegate, David Solan said, “Clubs are being squeezed to the limit and it’s not sustainable. We have heard rumours of two buses being neded to take the Clare senior hurling panel from the railway station in Thurles to the pitch because there are so many in the squads. We can’t keep going to the clubs.”

Replying, the treasurer confirmed that two buses were used “but one was provided free of charge”.
Keane went on to acknowledge the work done by the hurling and football supporters’ clubs, to which Whitegate delegate, Solan commented, “The figures you have given aren’t a true reflection so, as the supporters’ clubs are also helping with the costs.”

“I can only comment on the figures I am dealing with,” replied the treasurer.

At this point, an O’Callaghans Mills delegate asked, “Is it true that there are 31 members of the backroom team with the senior hurlers? Are they all getting expenses?”

“Not at all,” replied the treasurer. “A lot are doing a voluntary job and a great job. They are excellent GAA people. There is nothing more that the official 50 cent per mile being paid to anybody in Clare GAA.”