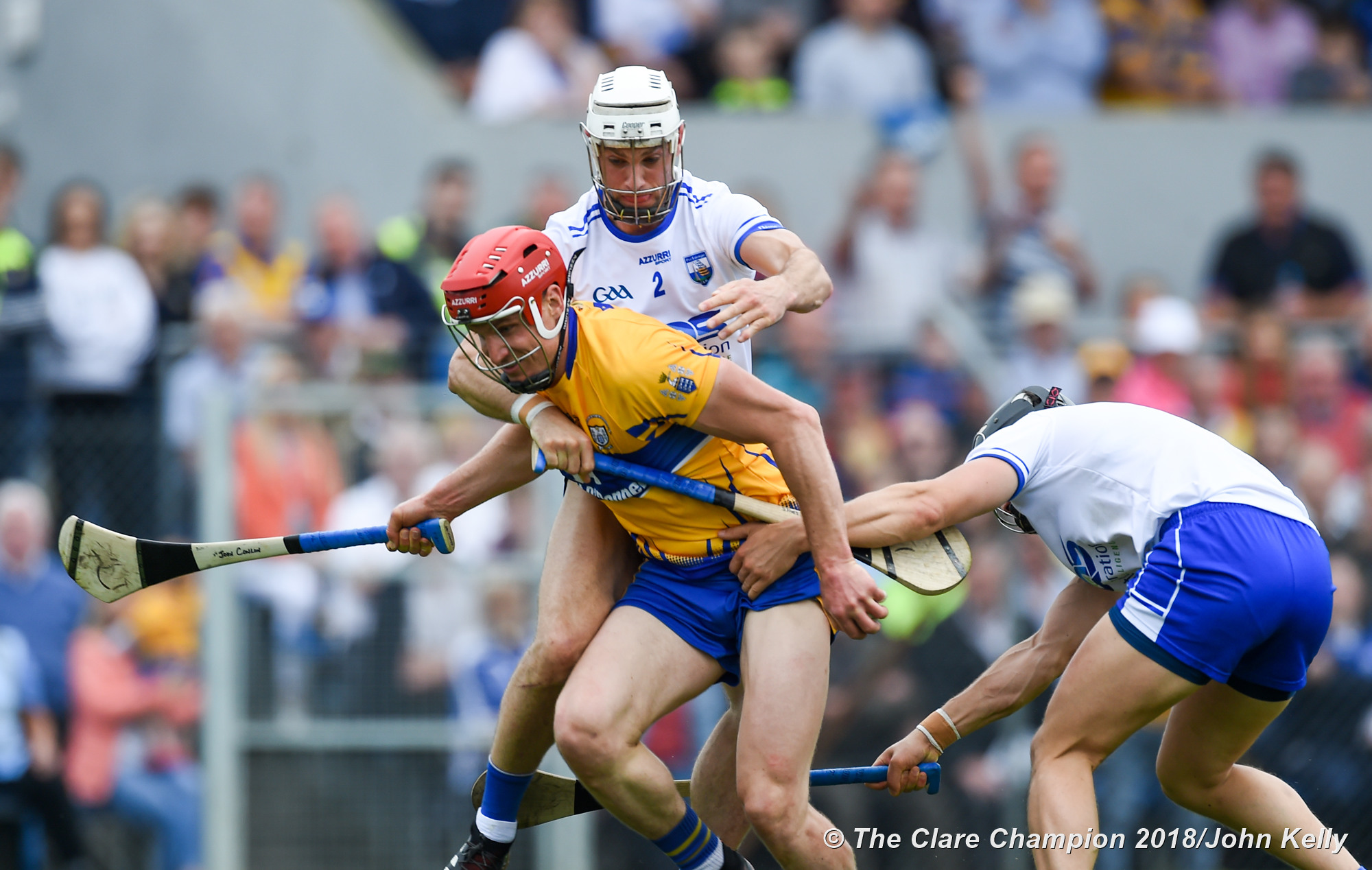 John Conlon of Clare in action against Shane Fives and Darragh Fives of Waterford at Cusack Park. Photograph by John Kelly.

CLARE GAA season ticket holders were excluded from the seated area at Cusack Park last Sunday for the Munster championship clash with Waterford.

Also, supporters who bought tickets for the standing areas paid higher prices than what applies for the terraces at the three other Munster Championship venues; Cork, Limerick and Thurles.

While the Munster Council originally justified this by saying that general admission would be on offer to all areas in Cusack Park, in actual fact the stand and terraces were segregated on the day.

A Clare season ticket holder this week said that when she purchased her ticket last November, she had no idea that when championship came around, she would be denied a seat for Clare’s home games. “When you bought the tickets it said you may not get access to the stand. I assumed that meant that it could happen because all the seats were already taken up, and they couldn’t be reserved. I didn’t think it meant you would be denied a seat. You are at a disadvantage if you are a season ticket holder in Ennis, because that means you absolutely won’t get a seat.”

The woman in question has followed Clare hurling teams for over 30 years and was in Limerick for the National League quarter final this year, when temperatures were barely above freezing.

“I just think it’s really unfair and I don’t think it was communicated correctly. There are probably season ticket holders out there with young family members and also older people, some provision should be made for them,” she added.

Even though an email had been sent out to season ticket holders with admission details in early May, very few of them were aware of the situation in Ennis until Sunday, she says. “There was huge confusion on the day. We had to go in a particular gate and when you went in you could see that access to the stand was blocked off. There were a load of people up with the poor stewards saying ‘why can’t we get in? We have our season tickets’.”

In a statement on Wednesday the Munster Council said, “In relation to the GAA season ticket holders, this is a scheme organised at national level by the GAA. As part of the terms and conditions for the GAA season ticket access to stand tickets will be subject to ground capacity. In Cusack Park Ennis, given the number of Clare and Waterford season ticket holders exceeded the capacity of the stand, it was not possible to accommodate them on this occasion and all were allocated terrace tickets.”

It also said there will be no seats for them when Limerick come to town on June 17. “For the Clare Limerick game a similar situation will arise regarding season ticket holders as the capacity is not available to accommodate them with stand tickets.”

In April the Munster Council had said the higher prices in Cusack Park were due to an absence of segregation between stand and terrace at the venue. However that did not apply last Sunday, with the areas clearly divided.

Explaining why people standing in Ennis were still expected to pay as much as those sitting in Cork, Limerick and Thurles, the Munster Council this week said, “In relation to the €20 price for Cusack Park, the original plan for last Sunday’s fixture was to operate a general admission policy. However, following a report from the GAA Safety officer Michael Slattery, the capacity of Cusack Park Ennis was increased on the basis of a number of conditions being met. One of these was to segregate the stand area for games which was communicated to both counties.

“As a result, stand tickets were allocated to the County Boards only to distribute – given the small number of seats available, they were not put on general sale, nor will they for the Clare v Limerick game. The €20 admission for all areas remains in effect as unlike the terraces in other stadiums in the province, it is possible to gain a centre of the pitch vantage point for terrace ticket holders in Cusack Park Ennis in addition to that area being covered for the entire length of the terrace.”

Apparently the fact that people will not have seats for a period of several hours does not mean they should be charged a lower entry fee.

It is understood that each club in the county received an option of six seated tickets for last Sunday. Many did not take some or all of the tickets, leading to gaps in the seated stand.

The Munster Council statement added, “In relation to elderly people who arrived early before the minor game last Sunday, upwards of 150 people who were of an older generation or were physically unable to stand in the terrace, were accommodated as a number of seats were held back to look after such situations.

“Finally, with a covered stand capacity of just over 1,300 in Cusack Park, accommodating season ticket holders or putting stand tickets on general sale is simply not possible and Munster Council will continue to work with the participating County Boards to distribute stand tickets through their network of clubs for the Clare v Limerick game.”