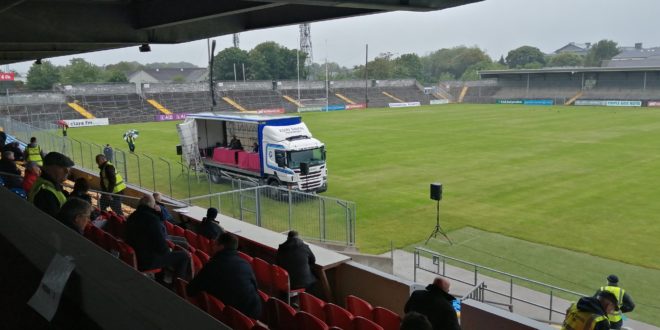 Delegates in the stands of Cusack Park with the executive of Clare GAA in a truck on Cusack Park for the June meeting of the County Committee.

Clare GAA Club Championships To Run On Proposed Formats For 2020

The 2020 Clare GAA club championships will begin on the weekend of July 24 with clubs opting to stick with the structures proposed by the Master Fixtures committee.

At the most unique meeting of the County Committee ever held, delegates sat socially distanced in the stand of Cusack Park while the members of the executive were perched on a lorry which was parked along the sideline of the county grounds. The option of holding the meeting online had been discussed, but the outdoor setting was the preferred choice.

Chairman Joe Cooney acknowledged the “strange circumstances” in which the meeting was being held amid the Covid-19 crisis, and held a minutes silence for those who had passed away since clubs last convened in February.

Two clubs, namely Newmarket on Fergus and Clooney Quin had submitted correspondence to the secretary requesting permission to apply for loans in order to fund works at their grounds. The chairman informed the meeting that this was not possible at the moment, as Croke Park has decreed that no funding is to be approved as things stand.

After a lengthy period dealing with isolated players and transfers at adult and juvenile level, the discussion turned to the issue of the 2020 Cúl Camps. It provoked some debate, with Tulla’s Brian Torpey expressing his dissatisfaction at the manner in which clubs were being treated. Games Development Officer Sean Chaplin outlined that under National Policy, a club may not hold their own club camp without also hosting a Cúl Camp, something Torpey labelled a “disgrace”. The chairman said secretary Pat Fitzgerald would make contact with Croke Park on the matter and inform the clubs of the reply.

The issue of finances was addressed by treasurer Michael Gallagher, with the Doonbeg man outlining that the finances of the board were in dire straits. He revealed that the board are currently working from a €250,000 bank loan and stated that he has no idea where the money will come from to repay that at the end of the year.

He expressed his opinion that the outlook at the moment is bleak, and identified the cost of running intercounty teams as being a “runaway train” from juvenile to senior level. He said backroom team numbers are often too high, and feels it is something that is not sustainable.

This was challenged by Kilmaley delegate and Clare senior hurling kitman Niall Romer, who claimed that some players on the senior squad along with management were still waiting to receive official team gear. Chairman Joe Cooney undertook that he would rectify that.

A lengthy discussion took place in relation to the proposed formats for this years clubs championships, with the chair of the Master Fixtures Committee Colm Browne outlining the reasoning behind their submission. He acknowledged that the formats in 2019 had been widely praised by clubs but said the timeframe available this year meant they were not an option.

A number of clubs expressed their desire for the hurling chanmpionship to be started earlier in order to facilitate moving back to structure of last year, with Sixmilebridge and Cratloe in favour of that move.

Miltown delegate and former chairman Michael McDonagh expressed his view that the football championship as it stands was not worth players taking the risk of potentially contracting Covid-19, and also outlined his fears that there could be potential cases as a result of games being played. He laid the blame for that at the feet of Croke Park, who he feels should have abandoned all club games this year in the interest of safety.

He also stated that his club would be in favour of the football format moving back to a group based structure, with Doonbeg backing this proposal.

Chairman Joe Cooney asked clubs to consider going with the structures outlined by the Master Fixtures Committee for one year, given the unique circumstances. This was supported by Ger Lyons of Ruan, who outlined that the 2020 campaign would always be known as the “Covid Championship”.

It was decided that a vote would be held, with the  choice being between the proposal to change the hurling championship or to ratify the Master Fixtures proposal. The committee proposal was carried 36-12, but no such vote was held to determine the football structure.

It was decided to start the hurling championship on the weekend of July 24 with the football getting underway on the August Bank Holiday weekend. Draws for this year’s championship are due to be held on Wednesday evening in Clareabbey at 6.30pm and will be streamed live by Clare GAA.

It was also confirmed that two underage competitions will run in each code in 2020, with the decision to run an U-17 football competition rather than the traditional U-18 minor competition proving the biggest surprise. The hurling minor championship will run for U-18’s, while an U-14 competition will be held in both codes.