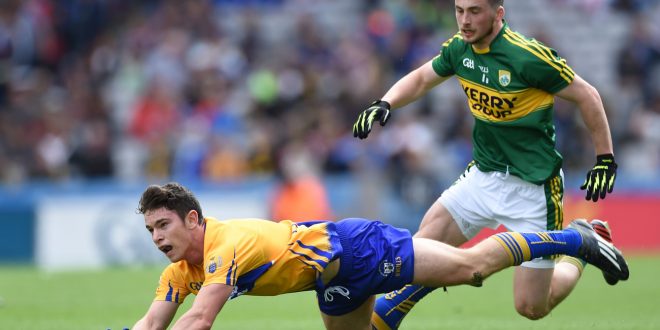 Cian O Dea of Clare in action against Paul Murphy of Kerry during their All-Ireland quarter final at Croke Park. Photograph by John Kelly.

A 14-point defeat leaves little room for putting much of a spin on things. Clare were beaten in almost every sector on Sunday.

From a management point of view, Colm Collins’ task is to try to pick up the players’ morale before Sunday’s game against Tipperary in Cusack Park at 2pm.

As poor as Clare were in Navan, if they manage to somehow beat Tipperary, they will move ahead of them on the Division 2 table. For that to happen though, a mammoth improvement and lifting of effort levels is required.

“We win together and we lose together. No player goes out to play poorly. This week we’ll have a look at it and go after the areas we feel we didn’t do well in. These things happen. Sometimes you turn in a really magical display and sometimes it’s poor. You’re never really as bad or as good as either. You just have to park it. There’s nothing we can do about it now. We just have to get on with it and concentrate on Tipperary,” Collins said as he emerged from a silent Clare dressing room. While Clare were reasonably competitive in the first half, Collins sensed they were struggling.

“Even though the score was very close in the first half, I thought there was a lot of things we were doing wrong. I thought it was a listless display but I didn’t see that second half coming. There just seemed to be a lack of energy. We’ll have a look at what we did last week. The thing about the national league is that you don’t get any time to feel sorry for yourself. You just have to get up on the horse again and prepare for next week.

“In general we’d be very disappointed with our display. We have to get everything back together, get going, prepare for next Sunday and hopefully produce a much improved performance,” he said.

Clare again fielded a young team but one that did not look anywhere close to Meath’s level.

“If you are playing Division 2 football, your learning curve is severe because you will be punished. I thought for a finish it was a bit farcical in the sense that anything we did at all was going wrong. A bit like last year’s game [against Meath], I saw things happening in the first half that I wasn’t happy with. At half-time we were saying it was a poor display and lets lift it but it just didn’t happen,” Collins lamented.

Meath manager Andy McEntee, meanwhile, was particularly happy with the impact of his bench on Sunday. Eamon Wallace and Seán Tobin kicked 0-5 from play between them, as Clare were ripped apart at the back.

“There is a good group here that want to play and you don’t want fellas that are happy to be sitting on the bench. When they come in, it’s good to see them perform. We have fellas who are hungry to play and that’s a great way to have them,” he said.
However, he was not as impressed with the amount of balls that they landed into Killian Roche’s hands during the opening 35 minutes.

“There’s a bit of a breeze that I didn’t realise was there and I’m hoping that explains why we dropped seven balls into the goalkeeper’s hands in the first half. You come into the last five minutes and teams that are not used to winning, little chances like that come back to haunt you. We got on a bit of a run at the start of the second half and Clare probably struggled a little bit after that,” he said, as Meath added two more points to the one they picked up away to Roscommon.

As poor as Clare were in Navan, if they manage to somehow beat Tipperary, they will move ahead of them on the Division 2 table.
Previous Clare greyhounds challenge for Clonmel classics
Next ‘Pot luck’ cannabis plant grows in garden