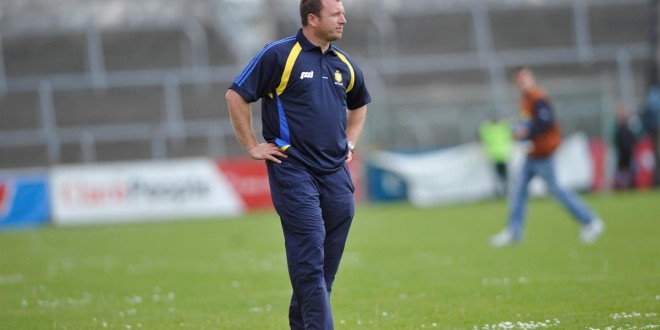 By Seamus Hayes
CLARE football deserves to be playing in a higher grade than division 4. They have shown this through county champions Cratloe, and their predecessors, Kilmurry-Ibrickane and Doonbeg. Just a few months ago we saw what Cratloe can do when they played Dr Crokes. The standard of football in Clare is knocked at times but if everyone gave 100%, Clare football is well capable of competing in a higher division.

That’s the view of former Clare and Munster player, Martin Daly who was speaking this week ahead of Sunday’s clash with Carlow in the second last round of the 2014 league race.

The Lissycasey man came into the Clare senior panel as an 18-year-old in 1992 and was part of the team that famously beat Kerry to win the Munster senior title that summer. He went on to play for the county for over a decade, eventually succumbing to a back injury.

Recalling his inter county playing days he noted that on two occasions when Clare were due to lose their league status, the league divisions were re-structured.

“It’s crucial for Clare football to get up and this is their best chance in a while. In recent years they played Wicklow and Limerick in the closing games and they were also chasing promotion and in the exact same boat as Clare. Carlow and Antrim are out of the promotion race and while neither will be easily beaten, this is Clare’s best chance for some time”, said Daly, man of the match when Lissycasey won their only Clare senior title in 2007.

Daly warned that “the last game against Antrim could be particularly difficult. They will be saying lets go out fighting and get ready for the championship and they will have home advantage. That’s likely to be the hardest of Clare’s remaining two games”.

Stressing that “Clare cannot take anything for granted”, he recalled “in one of the last games I played for Clare, we went to Carlow and prior to that we would not have come across them much. We felt that we would take the points but we lost. The way football has gone, especially in Leinster, with the progress made by the likes of Louth and Wicklow, the days of expecting two handy points are gone. If players and teams think that way they will pay the price”, he warned.

Daly  said there is a great chance there for Clare to be promoted this year but they must concentrate on getting the job done. “For now Carlow must be the focus and with the proper approach Clare can edge a step close to their target this Sunday”, he concluded.