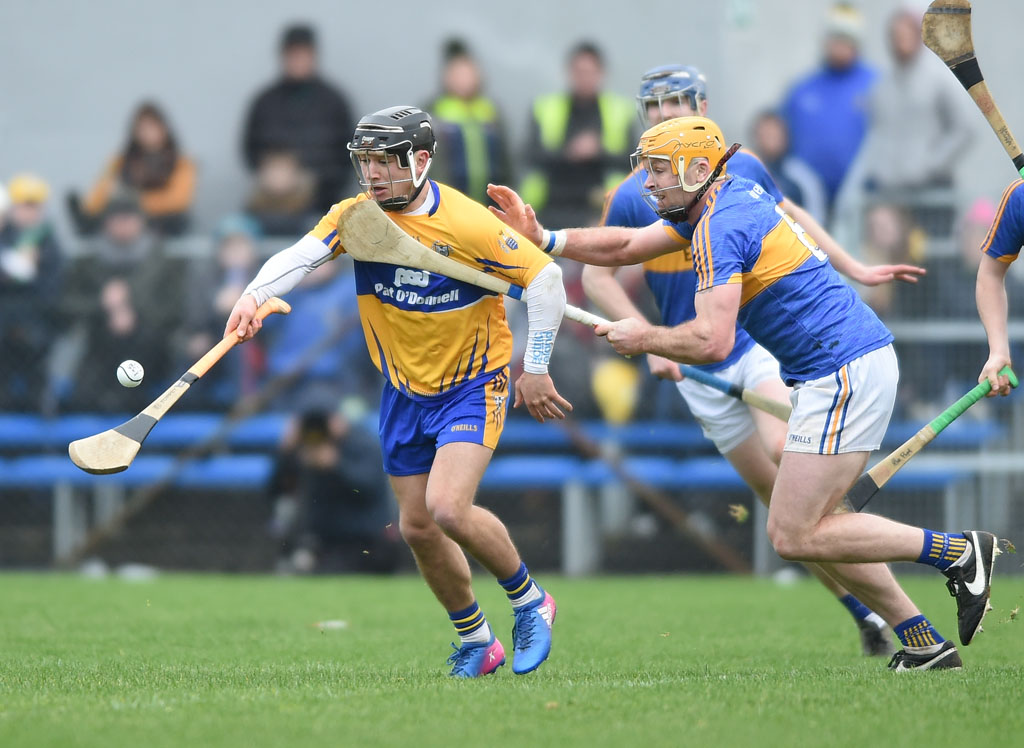 David Reidy of Clare in action against Padraic Maher of Tipperary during their NHL game at Cusack Park. Photograph by John Kelly.

Victories over Kilkenny at Nowlan Park don’t come about too often and Clare will be well aware of this as they head to the venue for Sunday’s round two league tie.

That Kilkenny lost to Cork in Pairc Uí Caoimh on Saturday is sure to result in a greater effort from the Noresiders to get some points on the board.

Both counties have players involved in Fitzgibbon Cup action this week, so the line-outs will not be named until after those games. Fears that the Noresiders would be without captain Cillian Buckley have receded. The defender, who was very impressive against Cork, was stretchered from the field in the closing stages but officials are understood to be confident that he will be fit to face Clare.

It is also expected that TJ Reid and Liam Blanchfield, who were introduced during the course of Saturday’s game, will be in from the start this week.

Clare were comfortable winners in the corresponding tie 12 months ago, when they were 2-19 to 0-12 victors, while Clare’s last visit to Nowlan Park ended in a one-point defeat. Indeed, the Banner side travelled to the Kilkenny venue twice in a week and lost both games by the minimum margin.

Both sides are expected to be along similar lines to what they had on duty last week. Goalkeeper Eoin Murphy excelled for the Noresiders against Cork, while Padraig Walsh was prominent in defence, along with Buckley, until he was forced out of action.

Brian Cody and his management team must plan without a number of the key players in their many successes over the past decade. Paul Murphy and Colm Fennelly are currently serving overseas with the Defence Forces and are likely to miss the entire league campaign. Ritchie Hogan is out injured, while Michael Fennelly and Jackie Tyrell have retired from inter-county hurling.

Five of the Clare side that started against Tipperary have Fitzgibbon Cup action this week, along with some of the substitutes. Joint managers Donal Moloney and Gerry O’Connor will be keeping their fingers crossed that they come through their games without injury.

Following the impressive win over Tipperary, the likelihood is that Clare will name a similar team for Sunday’s tie. They will know that while Kilkenny will again be in experimental mode, they cannot be taken lightly. The Noresiders have suffered successive defeats in the past two weeks, losing the Walsh Cup final to Wexford and then going down to Cork last week. They won’t want three defeats in-a-row, so Clare can expect a huge challenge.

A win on Sunday would go a long way to ensuring Division 1 status for next season, as well as edging Clare closer to the play-offs. A repeat of last Sunday’s form should give The Banner an excellent chance of collecting another brace of points.

Victories over Kilkenny at Nowlan Park don’t come about too often and Clare will be well aware of this as they head to the venue for Sunday’s round two league tie.
Previous Footballers head to the Royal County
Next One change on Clare hurling team