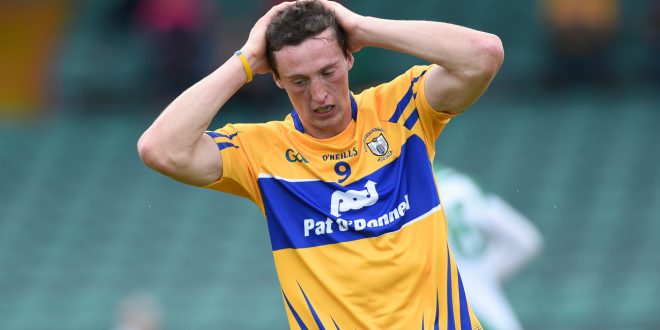 Cathal O' Connor and Clare were disappointed not to beat Cavan in their opening league game. Photograph by John Kelly.

SIX points up, nine minutes into the second half, Clare were both relieved and disappointed to pick up a point from their first NFL division 2 league game of the new season in Ennis on Saturday.
As the three minute of injury time ticked by, Clare led by a point after Keelan Sexton had kicked them 1-12 to 2-8 in front. However, Cavan equalised from a Bryan Magee free on a day when 16 players started their first league game. Clare had six players starting in the league for the first time, including four forwards.
Following a very rocky started, during which Caoimhin O’Reilly goaled for Cavan after just 49 seconds, Clare went on to dominate the first half. They led 1-7 to 1-2 at half-time on a day when five of Clare’s six forwards scored from play.
Éire Óg’s Eimihin Courtney goaled for Clare in the 12th minute, when full forward Sexton cleverly intercepted an attempted hand pass from goalkeeper Raymond Galligan.
Eoin Cleary put over three first half points, two from frees while Conor Finnucane pointed twice from play. Gearóid O’Brien and Sexton also pointed from play while Cavan’s Bryan Magee and goalscorer O’Reilly completed their first half tally, with a pointed free apiece.
Clare started the second half very well with points from Gary Brennan and O’Brien. However, Cian Mackey, who came on at half-time and played superbly, pointed twice to bring Cavan back into it.
A Dara McVeety goal, after a Mackey shot had been blocked was a huge boost to Cavan who added points from Ciaran Brady, Adrian Cole and Oisin Kiernan. The Cavan goal came after a Killian Roche short kick out was intercepted.
Clare were dealt a late blow when Gary Brennan was shown a black card, 13 minutes from time. Either team could have won it but Cavan were happier to bring a point home with them ahead of next weeks tie against Louth. Clare face a trickier game next Sunday, when they travel to Navan to play Meath.
A more comprehensive report and match analysis will appear in Thursday’s print edition of The Clare Champion.

West Clare native Peter O'Connell has worked for The Clare Champion for 12 years and covers everything from sport, especially GAA, news, features and has been even known to branch into the fashion scene on occasion.
@@westclarepage
Previous Clare hurlers face a tough Tipp challenge
Next Reidy excels as Clare make winning start