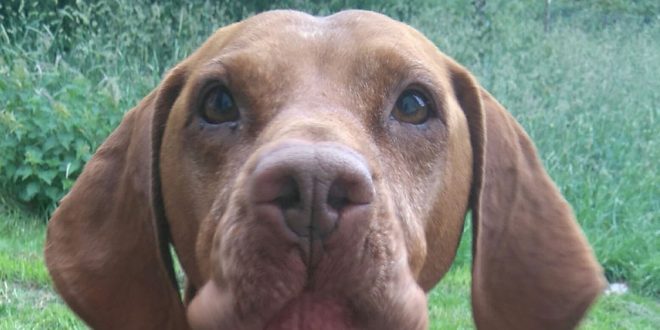 A RESCUED Ennis dog is to represent County Clare at the forthcoming Nose of Tralee competition, which is being run by Pet Sitters Ireland.

Rooney, a Hungarian Vizsla rescue dog, is the Clare contender and owner, Orsolya Shannon outlined how far he has come since he was rescued from the pound last year.

“He was already four years old when we found him in the local pound, nervous and scared. From the first day, he has been eager to please, loving, playful and a wonderful companion for us and our other Vizsla, Abby. The irony is not lost – we rescued him and now he is in training to become a search and rescue dog. His hard-working, loyal nature and outstanding nose means he has flown through training and should soon be qualified,” she said.

Rooney was selected as one of 32 dogs nationwide that are in contention for the Nose of Tralee title and was selected out of 1,200 entries to represent the county.

Orsolya is originally from Hungary but has been living in Ireland for seven years, four of them in Ennis with her husband, who hails from Doolin.

“I came across this competition online and I thought it sounded funny – the ‘Nose of Tralee’. I had this picture and he is very cute on it so I gave it a shot. The first round was decided on public votes and judges’ decisions and I never in a million years imagined he could win the county competition,” she outlined.

She explained that when they took Rooney in, they already had a dog, another Hungarian Vizsla. She was four years old when a friend sent Orsolya a picture of Rooney and asked if he was the same breed.

Orsolya confirmed he was and found out that he was at the Ennis Dog Pound. She had to enquire about him.
“We didn’t get a lot of information, only that he was four and his owner got too old to go hunting with him. When we saw him, he just melted our hearts, with his big brown eyes and facial expression. He had lost hair on his elbows; we were guessing he was sleeping on hard ground. When we brought him to the vet, who scanned for a microchip, it turned out our dogs are brother and sister,” she said.

Orsolya explained that the two dogs really bonded but Rooney was still very nervous about a lot of things.
“He showed signs of aggression when he was fed and when he was lying in his bed. On one of the first days, I didn’t approach him correctly and he got scared, he growled and snapped at me. I got a fright but didn’t want to give him back; we really wanted to help him and give him a good home. My husband agreed to keep him with only one condition, that we name him Rooney, after his favourite footballer.”

“In a few months’ time, he trusted us completely. He got fitter, faster, more social and very playful, just like a sweet little puppy. Meanwhile, we were trying out the search and rescue training with our other dog, Abby. One day, we decided to try him too. He was a natural, very concentrated on the job, with excellent nose work. It makes us so proud to see how great he is – it shows you can teach an old dog, now nearly six, a new trick,” she continued.

Orsolya explained that Rooney is now a full member of the family and is asking the people of Clare to get behind him and to cast their vote.

“We love him to bits, he is just a very grateful and loving dog, a wonderful companion. We thank you for this opportunity to recognise the beautiful difference Rooney has made in all our lives,” she concluded.
The Nose Of Tralee is run by Pet Sitters Ireland, Ireland’s largest pet sitting and dog walking company.
The competition is a chance for pet-lovers across Ireland to celebrate the love that they have for their pets and share it with everyone. The competition is open to all types of pets.

A spokesperson for the competition said, “With over 1,200 pets from around Ireland entering the competition, we really are delighted with the response this year. Entrants have been through a public vote and a judging process to make it through to the final and now the 32 finalists have each been chosen to represent their county.”

A public vote will decide who goes on to be crowned the overall Nose Of Tralee 2016 and the winner will be announced on August 22.To vote for your favourite nose, visit www.NoseOfTralee.com.