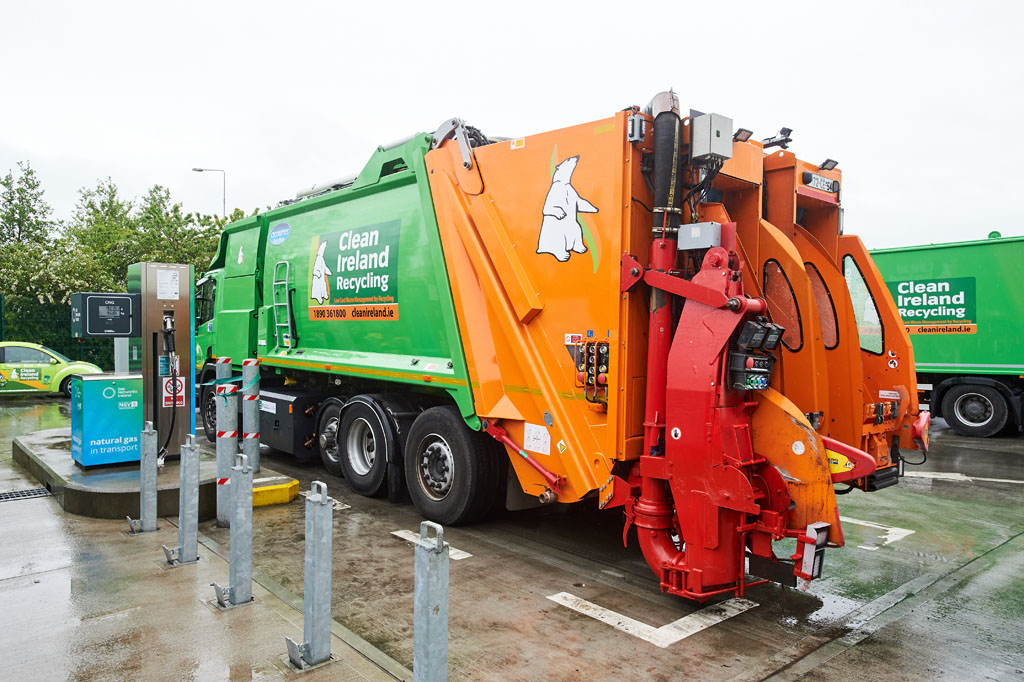 In a major partnership with Gas Networks Ireland, it has developed the country’s first fast-fill CNG refuelling station in Shannon, which was officially opened by Minister for Communications, Climate Action and Environment, Denis Naughten.

The company’s waste collection fleet will be fuelled from the station, with the CNG significantly lowering emission levels, compared to the traditional diesel engine trucks. Carbon dioxide will be down by 22%, nitrogen oxide by 70%, sulphur dioxide by 80% and there will be 99% less particulate matter.
It will also deliver a cost saving of 35% to the company.

Clean Ireland Recycling has also invested in specially-commissioned, lower-emission Scania CNG trucks and will continue to replace its existing diesel-powered fleet with CNG vehicles over the coming years.

Speaking at the official opening, Minister Naughten said, “In fairness to Clean Ireland, they have been one of the leaders here in this country in relation to the whole area of recycling. They were one of the first companies to bring in pay-by-weight, to start the whole segregation of material, not just collecting the black bin. Here, again in relation to gas-fuelled trucks, they are the country leader in terms of bin collection. It’s a great boost for County Clare, a great boost for the Mid-West region. It’s showing the type of leadership that we need right across industry, in relation to using cleaner fuels and, hopefully, fully green and renewable fuels in the future.”

He added, “Clean Ireland already has an anaerobic digestor in Limerick, that’s being used to generate electricity and heat. But probably, in the future, you’re going to see the organic waste, the brown bin that’s collected by Clean Ireland, going to this anaerobic digestor, generating gas that’s going to fuel the truck that collects the refuse. That’s the full cycle that you’re going to see in relation to this. Hopefully, this trend will be repeated across the country.”

The type of technology being used will become much more common, he feels. “I think, in 10 years time, you will see a lot of new trucks coming onto the road, running on biogas or other clean solutions. I think it’s going to be far more difficult to operate on diesel right across Europe and I think Ireland is going to be part of that transition. We have already been leading at European level, in trying to increase the specification for trucks coming onto the market. Hopefully, we will see cleaner technologies coming to the fore in the not-too-distant future.

“Clean Ireland reckons that if they have six or seven trucks, it will be commercially viable for them to use green gas. They already have two vehicles that they purchased last year. As they replace vehicles, they will increase that. Hopefully, in the future, we will see Clean Ireland operating a fully green fleet of trucks, particularly on the kerbside collections right across their catchment area. Because diesel does cause problems in relation to emissions, particularly on kerbside collection, because the trucks are stopping and starting. They are less efficient and gas is a much cleaner fuel for that,” he concluded.
Brian Lyons of Clean Ireland Recycling said the company has always sought to be more environmentally friendly.

“Lowering our carbon footprint is a priority for our business and for our customers.

Clare dreaming of a green Christmas