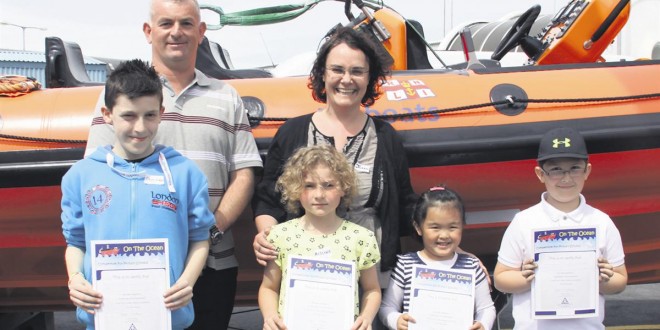 The Health and Safety Authority and Clare Education Centre recently announced the county winners of the On the Ocean art and writing competition, which aims to raise children’s awareness of ocean safety

For children in coastal communities, there was an additional focus on the life of fishermen, staying safe at sea, the role of rescue services and life in fishing communities.

Joanne Harmon, who is the education manager with the Health and Safety Authority, and Pat Hanrahan, director of Clare Education Centre, presented the winners with certificates and prize money at a workshop in Galway, where the winning children had the opportunity to work with artists and writers from Kids Own Publishing.

A book will be published on ocean safety from their work and sent to all primary schools and libraries later in the year.

Ms Harmon said, “We’re delighted to present the winner and runners-up with their well-deserved prizes. It’s so important for children to become aware of water safety and the dangers of the ocean, especially coming into the summer season when they are off school.”

In addition to raising ocean safety awareness amongst children, the HSA brought their primary school workshops directly to six fishing communities around the coast.

The competition and children’s book coincides with the authority’s awareness-raising campaign, aimed at reducing death and injuries in the fishing sector. Based on numbers employed, sea fishing is the most dangerous sector in which to work and fishermen are up to 40 times more likely to be killed at work than other workers.

Mr Hanrahan said, “We are delighted to be associated with a competition like this, which is promoting the health and well-being of children around ocean safety and raising awareness of the high levels of risk that fishermen undertake in their work. The children hugely enjoyed exploring these themes and learning about life in coastal communities. Children are a huge source of influence in families and, if they can be made aware to keep themselves safe, then they can also to bring the safety message home to parents.”