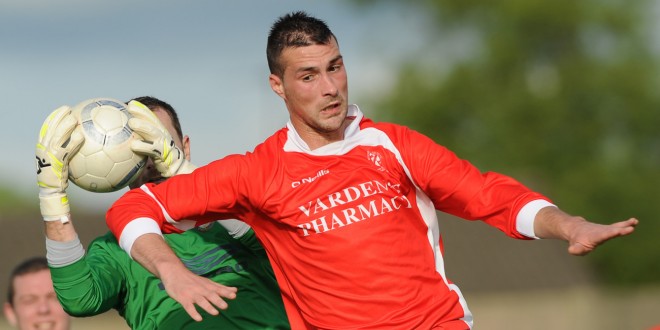 Clare will enjoy home advantage for the Oscar Traynor inter-league semi-final on this Sunday (kick off 2pm), when Kilkenny will provide the opposition.

Champions for the past two seasons, Clare go into the game without team captain Stephen Kelly. He is out with a leg injury he picked up when playing with Newmarket Celtic in the FAI Junior Cup semi-final against Janesboro a few weeks ago.

Team boss Donie Garrihy expects to otherwise have a full strength panel to choose his team from, although there appears to be some doubt about the availability of Colin Smyth, who did not line-out with Newmarket Celtic in their Clare Cup semi-final win over Shannon Town at the weekend.

“At this time of year in particular, there will always be a few doubts as we come to the end of a long season. We have a few guys who are carrying knocks and we will know more later in the week,” Garrihy told The Clare Champion on Monday.

Regarding their opponents Kilkenny, he noted “they have turned over a few decent leagues on their way to this stage”.

“In the quarter-final they were impressive in accounting for last year’s finalists, Inisowen. They have lots of pace and plenty of football. Their manager was part of their four in-a-row winning team from the late ’90s, so they have that experience.”

He stressed that Clare are not concentrating on winning three in-a-row. “We are focussed on the next game and that has been our approach all season.

“In our 52 years’ existence, Clare have won three titles. We are still new to winning something major. We are not getting carried away. We have hit a vein of good form in the last few years but we are not taking anything for granted. Our next game is Kilkenny and that’s my focus and has been for the last three weeks,” Garrihy continued.

He accepts that it would be a dream come true to play in the final in Ennis. “If we win on Sunday, we will have a home date in the final against Carlow, who defeated Sligo-Leitrim in the semi-final last week,” he added, staing he hopes to see a good local following at the game on Sunday.

In Barry Ryan, Clare have one of the most experienced goalkeepers in the game. The Avenue United clubman takes over the captaincy in the absence of the injured Stephen Kelly.

It is an experienced squad and while nothing can be taken for granted, they have shown over the past couple of campaigns that they are capable of matching the best. Come Sunday evening, it will be a surprise if Clare are not looking ahead to hosting Carlow in the final.