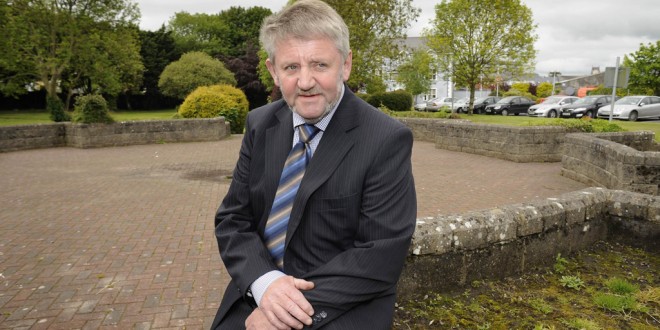 Former councillor Tommy Brennan who was among those to receive the biggest retirement payout.

CLARE has been “blacklisted” when it comes to job creation according to Ennis councillors, who this week criticised the IDA for not bringing employment to the county. Councillor Tommy Brennan has demanded that Ennis Town Council write to both Minister Richard Bruton and the IDA to ask “what they have against County Clare”.

Councillor Johnny Flynn commented that the IDA should change its name to “Industrial Development for Dublin, Cork and Limerick”.
This week’s meeting of Ennis Town Council saw Councillor Flynn call for an Ennis and District Economic Taskforce to be set up in preparation for the upcoming abolition of Ennis Town Council.

He urged that the taskforce should target unemployment, job creation and implement the actions of the Clare County Council Enterprise Strategy. The councillor stated that despite recent jobs announcements by the IDA, “unfortunately Ennis doesn’t seem to be getting any of these”.

He went on, “Ennis should be standing up and forming a group to look for its fair share of jobs. Other towns have passed us out. We have a fantastic location with the airport and motorway. There are lots of reasons why we should have jobs here.”

Mayor of Ennis Mary Coote Ryan said there has been no significant jobs announcement for the town in a long time.

However, Councillor Tommy Brennan objected to setting up a local group, fearing it would be a “quango”.
“If we are going to create jobs, we have to get the IDA to do the work. No small group will create jobs. I am sickened to think we are being blacklisted. No jobs are being created in County Clare and we should write to the minister and the IDA.”

Councillor Flynn clarified that any group would be made up of volunteers and would not be a quango.

Councillor Paul O’Shea stated he would support any group set up to help create jobs. “We are being overlooked and forgotten about,” he said.
Councillor Peter Considine pointed out the IDA previously stated that it is the companies themselves who decide where to locate. He added that Clare may be losing out because there is no centre for third-level education, despite the fact that Limerick and Galway are a short commute away. He also urged the local chambers of commerce to do their bit for job creation, saying he does not believe the town council can do much in its remaining months of existence.

Councillor Michael Guilfoyle stated that the chamber has been supportive but local businesses are struggling. Councillor Brian Meaney suggested that Ennis looks at other towns that have been successful in job creation. He pointed out that Dingle has had success, despite not having a town council. It was suggested that representatives from Dingle be invited to attend a meeting to advise on how they achieved success.

Responding to Councillor Flynn’s motion, Leonard Cleary, town clerk, stated, “The local authority is following national departmental guidance in relation to organisational restructuring following the abolition of town councils. At present, the new municipal district committees are being planned for in terms of administrative support.

“Specifically, the economic and enterprise services will need to take account of such services already provided by Ennis Town Council and Clare County Council. It will also need to have regard to the incoming Local Enterprise Office (LEO) function.

The minister has directed that this office be located in the headquarters of local government.
“Further regard needs to be taken of the local development ‘Alignment Process’ and the transition from the former county development board structure. At present, economic and enterprise strategies exist under the broader Clare Local Authorities umbrella. The formation of an Ennis and District Economic Taskforce would need to be considered in this context but with the primary objective of strengthening enterprise and economic development in Ennis as the county town.

“Any structure being considered would need to avoid duplication with other similar fora and build upon a partnership between the statutory sector and the business community.”

He added that the Ennis and Environs Plan and the Ennis 2020 Framework provide objectives to address the points in the motion.
Also in relation to job creation, Councillor Flynn proposed that world-class broadband be provided free in the town. He commented that Ennis Town Council

“utilise the significant broadband funding within budget to provide world-class free WiFi or 4G in the town centre and business districts.
“High-quality broadband is recognised as essential infrastructure investment in any drive for job creation in the growth sectors of innovation and technology.”

Mr Cleary replied, “Clare County Council, in conjunction with Shannon Broadband Ltd, submitted an application some years ago to the Department for a Metropolitan Area Network (MAN) for Ennis. MANs had previously been approved in the Shannon Region on the basis of 90% State funding and 10% local funding. The department has not yet to date approved the Ennis MAN.

“The funding allocated by Ennis Town Council towards meeting the local contribution has been referred to in a number of reports by the Local Government auditor. The funding has, in effect, helped defray shortfalls in general budgets. The matter will be reported on to members as part of the Annual Financial Statement for 2013,” he stated.